Random thoughts on the Zirka Circus 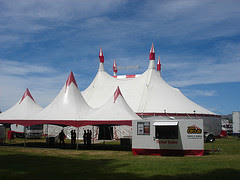 Went to see the Zirka Circus with some members of my family today. Very noisy, music-wise, but the music itself was good and very suitable for what was going on. Quite a small troupe – I counted around twenty at the end, almost equally men and women. A youngish man and woman took the lead in practically everything; he was on for around twenty minutes solid at the beginning, and she turned up in every one of the women’s acts (except the cycle riding at the end, I think) and often appeared when the two of them came in as a romantic couple – there wasn’t any story as such, although it started off seeming as though there might be.

No ringmaster – they seem to have gone the way of the dodo – and very little vocal stuff from the cast, except to shout ‘Hoi’ or some such when they’d performed a trick. The two clowns (both white, as opposed to an otherwise Asian company) didn’t speak words, but used whistles to ‘speak’ (adding to the general piercing noise when they both got going). There was at least one child in the troupe: a boy who couldn’t have been much more than twelve, if that. He was very small, certainly. He did some remarkable balancing on his right hand – including ‘climbing’ down and up the stairs on it.

Most of the standard (Asian) acts were there: the swinging around on silken material; nine women on a single bike; balancing plates on sticks; swinging those things consisting of two ‘weights’ (for want of a better word) held together by a rope; the women doing the string held on two sticks (one in each hand) thing where they toss a round item with a ridge in it so that it stays on the string; the men on large metal double-sided wheels that they begin by wobbling around at speed and gradually building up until they’re balancing on one edge or such; the main woman doing the balancing on chairs thing where she gradually adds another chair; three women doing juggling with large balls while lying on the backs – and eventually doing it while up above each other; most of the men playing with Mexican style bowler hats and juggling with them (in that way that makes it look as though one of them is always suspended in mid-air), and then of course standing on each other and tossing them around; tumbling through hoops. You can see examples of all these in the gallery on the Zirka website.

Their TV ad is there too - it gives an idea of the energy levels, but is over very quickly (the double-wheel is momentarily visible).

The end of the first half consisted of a double wheel (similar to what I’ve just attempted to describe) held together in the centre by various metal struts, and slung in the air by solid cables. I’m not sure how it all worked, but it was a bit like two of those endless wheels that mice are sometimes given to race around in joined together. One of the white males got in one of them and got the whole thing swinging around so that he would go from floor level right up and around to the ceiling and back down again. The other wheel of course was like a counterbalance to this, and one of the Asian guys got into the other side and began doing daredevil stuff such as going upside down and finally walking on the outside of the wheel as it hit its highest point, slipping through the metal structure in the middle and going up over the other wheel as it reached the peak – then doing juggling while he was up there, and then putting on a blindfold and doing it. That was certainly the most breathtaking act in the circus.

There was a bit of a magic section in which a woman was put in a box and fiery brands passed through it – then she wasn’t there when they opened it, and then three women climbed out of the top. Even if they do do it with mirrors it was pretty impressive.

The whole thing had heaps of energy, one act sliding into the next with little hiatus. Lots of dry ice to give atmosphere. And several members of the cast selling stuff before the show and during the interval – including the little boy. No star-glamour here!

Photo of the Zirka Circus Tent by Cafe Cecil
Posted by Mike Crowl at 4:42 pm

Thanks for the review Mike, I'm taking the family there on Saturday. Do I need ear plugs for our kids (3&5) or is the music bearable? Thanks again

It is fairly loud, but not unbearable, as I recall...and I was sitting fairly close to the front.