A search through my clippings, and on my computer, reveals that I don't have any reference whatsoever to the word stanchion, likeable enough as it is as a word.   Which means I won't have any reference to the phrase plastic stanchions either.  In fact, the word is so little visible in my vocabulary that I had to look it up on Google to remind myself what it meant.  It sounds a bit like truncheon but isn't related, as far as I'm aware.  Which led me to look and see what truncheon comes up with when you go off to Wikipedia.  They suggest the obvious: a policeman's baton, but there are three other references there as well.  A truncheon can be a stem cutting off a plant which is then used as a means of plant propagation used by gardeners.  Well, I guess gardeners would know that use of it, though I don't (I'm too amateur a gardener, obviously).  Truncheon is also the staff of a spear, but this is so obsolete a usage that only someone like Tolkien would know it well enough to use it in the Lord of the Rings trilogy.

The word was also used as the name of a Royal Navy submarine that was commissioned in the last few months of the Second World War.   It served with the Navy until 1968 when it was bought by the Israelis and renamed the INS Dolphin.  She was eventually scrapped nine years later, so I hope the Israelis got their money's worth. Well, there you go!  Your bit of trivia for the day.   (We went to a quiz night at a local pub recently; it's surprising what you know, what you're pretty sure you know and have to argue for, and what you have absolutely no idea about whatsoever - sport, mostly, for me, although even there I managed to suggest some possibilities.)

Truncheon, as you might expect, is a word with some French history.  It first appeared in our language, as far as we know, around the 14th century, when it went under the Middle English umbrella as tronchoun.  Its parentage was the Anglo-French word, trunchun, and that in turn goes way back to the Vulgar Latin word truncion/truncio, which comes from the 'proper' Latin word, truncus, which means a trunk.  I suppose there's a connection between a trunk (the trunk of an elephant?) and the baton we know today, but it seems a bit of a distance.

Stanchion (to go back to where we started in this post) initially has a similar history: Middle English stanchon, Anglo-French stanchun or stançun.  These words, however, were alterations of an Old French word, estançon, which is apparently a diminutive of estance, meaning a stay or a prop.  At least stanchion starts where it ends, you might say.  [Thanks, Merrian-Webster, by the way.]  Estance is a fancier ancestor to have than truncio, I think, even if it's not quite a old.

It just occurs to me that in our usual English spelling fashion we have managed to make one of these words end in 'ion' and the other in 'eon'.  Ain't English fun? 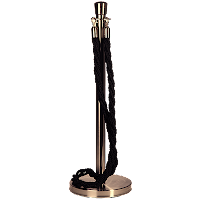 Perhaps because stanchion has retained its original meaning rather more, it tends mostly to relate to things that stand upright and hold something else. Those little things you see in restaurants where they hold the number of your order are a form of stanchion, I suspect, though I don't know if they're actually called that.  Stanchions appear in restaurants more as a form of crowd control: they'll often have a rope dangling between them to stop unworthy patrons from joining worthy ones.  [See the fancy model to the right.]  I notice them mostly in banks where they force people to form queues, and where children delight in dropping the connecting 'rope' (of whatever form) off one stanchion, find they've just received a disapproving look from a parent, and then have to figure out how to put it back again.