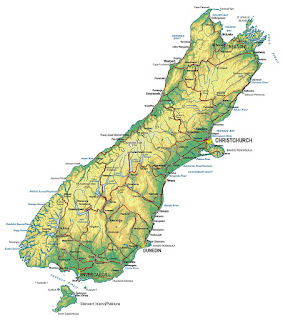 We've been on holiday for the last fortnight, travelling around the South Island, from Dunedin to Christchurch (with a couple of overnight stops between) up the Kaikoura Coast, to Blenheim, Nelson and back down through the middle of the upper part of the island, a trip we've done before but had pretty much forgotten - in terms of what kind of scenery it was, and so forth.  In fact the last time we did that trip we had my 13 or 14-year-old son with me and we spent much of the time trying to remember all the names of the various bridges, rivers, culverts and so on, linking them together in a great long sequence.

It obviously wasn't very effective, as I didn't recognise a single name as we drove by this time!

I'm finding it tricky coming back to my usual PC keyboard; I've been typing on an iPad, and the difference is considerable.  The iPad keyboard is smaller, and it's very easy to hit the wrong key (though at least it does a good deal of correcting for you as you go along, some of it rather random).  Plus, a number of items are in different places, and at present I'm still reaching for where things are on the iPad rather than the keyboard.  That's the least of any problems.

Just before we went away we tried to scan something onto the computer.  My older printer, which is the one with the scanner, refused to do it.  Another older computer, attached to the laptop, refused to do it.  Obviously both of them felt they were in retirement mode, and didn't need to keep working the way they used to. (My current printer is a Speed King, printing out reams of pages at a great pace.  But that's all it's capable of doing.)

Perhaps I need to investigate some print shop websites to see if I can dispense with printers altogether!

Anyway, our trip around the South Island was full of highlights.  I've kept a diary of the day to day activities and people we met (and animals - there were several that made some brief impact) and I'll post some of those on the other blog at some point in the next week.
Posted by Mike Crowl at 1:32 pm

I remember that! We went through Lewis Pass and put all the place and bridge names into a looooonnnng sequence. I never forgot it! Good memories, Pops! And to be precise, it was January 1997.

You never forgot the sequence, or the memorising! LOL. Thanks for clarifying the date, Dom, we weren't sure exactly how old you were. That's great.