I attended a quadruple book launch tonight at Knox College, having been asked to say a few words on the experience of reading P T Forsyth, who is the subject of two of the books, both by Jason Goroncy. (Kevin Ward is the author of the other two books.)

I felt a bit ill at ease amongst a bunch of academics, and having decided to speak without reading from notes, since I assumed that the other speakers would also do so, was surprised to find that all five of them used notes extensively, even though all of them are University level teachers. Well, there had to be an odd man out somewhere. 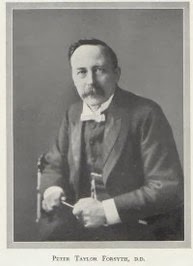 Anyway, it was never intended to be a long speech, and it wasn't. In fact, I probably missed out some things I intended to say, and muddied the ones I did say. Never mind. I don't claim to be good at speaking in public - I thought of trying to act the role of myself as a public speaker, but I'm not sure that I got there. This post then, is an attempt to tidy up what I really would have liked to say.

So...P T Forsyth - the emphasis, I think, is on the second syllable: For-syth. (Much more Scottish that way.) I'd never heard of Forsyth until a couple of years ago, perhaps, and even then only came across him on Jason Goroncy's blog, where he now has his own subject heading. At first I got the impression that he was some old fogey of a theologian that Jason had cottoned onto; I didn't realise at that point that Jason had two books in the pipeline focusing on Forsyth, and more than that, had done his thesis on him, and more than that still, was virtually one of the world's experts on him. Read his first book on Forsyth, called Hallowed be Thy Name, and you'll see what I mean. Jason has a breadth of understanding of both the man and his theology that's occasionally mind-blowing. Well, actually mind-blowing most of the time.

Anyway, I kept noticing references to Forsyth on Jason's blog, and occasionally read a quote from Forsyth that was included in a post. And then there was more and more about the man - mainly because Jason's book was coming closer and closer to being published, and he was doing a good deal of promotion for it - naturally. But I still didn't take much notice of Forsyth himself, or of what he'd written. The first time I actually copied anything from Jason's blog (onto Evernote, my clippings 'file') was in July this year, when he wrote about the second of his two Forsyth books: Descending on Humanity and Intervening in History: notes from the pulpit ministry of P T Forsyth.  Something in that post clicked with me, and I began to sit up and take notice of the old theologian. (Not Goroncy, Forsyth.)

Then, two or three months ago, I was trying to work out a better theology of the atonement - not by myself, but in relation to arguments that had surfaced twice on the Net in regard to it over a couple of weeks. I spoke to Jason about it and he suggested having coffee and talking, and when we did he handed me a copy of Forsyth's The Work of Christ, and suggested I read it. I took it away, and did read it - some of it twice (and because of the nature of Forsyth's style, some of it more than twice; I'll explain why in a minute).

It was exactly what I needed. It wasn't as if Forsyth was coming up with a completely new theology of the atonement - there's no such thing, really - but he brought such clarity and such a personal viewpoint to what he had to say that it was as if I was getting hold of it for the first time, and in a way that was immensely satisfying to my miniscule theological brain. He also clarified the whole aspect of God's holiness - something that's exceedingly important to him - and the place of Christ in the whole business - another one of his great themes. In doing so it helped open up for me a different way of thinking about Christ, something that I've also needed to do for many years.

Forsyth isn't an easy writer to read (though Jason says that the more you read him the easier it gets). I can't quite put my finger on the reason for this, but I wonder if it isn't partly the fact that he's Scottish. I have the same problem with George MacDonald, another Scottish writer. Both of them use the English language in a way that's slightly odd. It's something about the sentence construction, I think, rather than the words they use, because these are straightforward enough in general. MacDonald is perhaps more difficult than Forsyth; some of his sentences verge on unintelligibility as he leaps from thought to thought. Both he and Forsyth seem almost to turn the sentences inside out, put things back to front from your normal expectation. It's impossible to describe, but no doubt someone more able than yours truly could do it.

However, I worked hard at reading The Work of Christ. Fortunately Jason gave me a copy rather than lending me one; it's now littered with markings. I wrote notes on some sections as I read them, and even though it felt at the time as though I wasn't grasping what he had to say, it seems that I did. He's obviously a better teacher than I suspected. The way he hammers home a point works; he revolves around and around it until he's sunk it in. As I think about other theology in the course of my normal reading/writing, I find Forsyth's name keeps coming to mind, and what he said about matters.

And while I was reading The Work of Christ I also began to read Jason's first book, Hallowed be Thy Name. This is quite hard work too - for me. I'm not incapable of reading theology, and taking in theological terms, but it makes my brain ache a bit at times. Still reading the two books in tandem meant that I was cross-referencing Forsyth's thinking, and this was immensely helpful.  Of course Jason's book is about much more than the Forsyth's view of the atonement, but everything in his book connects, so that you begin to feel you're getting to know how Forsyth looks at things. I've got a long way to go yet, but it's an interesting journey.

Forsyth doesn't like to give concrete examples; you might almost say he writes at a kind of abstract level. Some things, which are probably unexplainable, he doesn't trouble himself to explain. At least not in The Work of Christ. I'm the kind of reader who needs some 'pictures' to get a hold of, some stories to back up the theology. As far as I can remember there's only one story in the whole of The Work, and it's a vivid one about a railway worker who saves two trains from colliding by lying down between the tracks and manually working the switch, when the lever that should do the job has jammed. But having used that story, Forsyth then proclaims, pretty much, that it doesn't suffice for what he's trying to say.  And he's right. But for the kind of reader I am, it's a help in terms of feeling as though there was something to hold onto in the book.  (Incidentally, he also says at one point that if you haven't bothered to do some philosophy then it won't be surprising that you don't understand theology.  I thought this was just a little sniffy of him, but I jotted a note on the page about it, and carried on reading.)

Theological writers in general, I guess, don't tend to make connections with the down-to-earth. That's perhaps not their job, but it may also explain why I've found some of them very hard work. Newbigin, whose book, The Gospel in a Pluralist Society, I re-read this year, is an exception; he beds his theology in the real world in a way Forsyth doesn't appear to do. However, I may be being unjust to Forsyth. At least, while he sometimes appears to use some words in a different way to the rest of us (which may be a result of his philosophical training), he doesn't change their meaning entirely. I remember reading a small amount of a book by Elizabeth Schüssler Fiorenza, and being astonished by the cavalier approach she seemed to take to the English language. Words changed meaning at the drop of a hat, as far as I could tell.

Forsyth is consistent in his use of language, at least. You just have to work out why he's using a particular word ('moral' was one I kept tripping over) in such a way. Once you've got hold of that, you can keep moving forward.

Well, this was intended as a kind of statement of what I would have said if I'd had plenty of time at the Book Launch, and had brought notes with me that were clearly written out. So if you were at all bamboozled by my speech earlier, hopefully this will help make more sense of it.