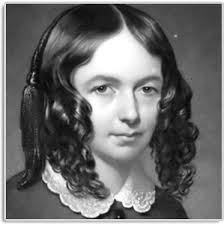 She [Elizabeth Barrett Browning] had decide that poetry, whatever language it was written in, was most certainly work. To write poetry was the most worthwhile work in the world because poetry was truth and there could be nothing more noble than trying to express universal truths. She did not feel shy about calling herself a poet - even when she recognised that she had only managed to produce 'sickly poetry,' She had absolute confidence that with time she would do better and that the struggle to do so was worthy in itself. A good poet was always 'one of God's singers.' Trying to become one of this select band was an ambition she was proud of and did not conceal. It had nothing to do with what she called 'versifying,' that scribbling in commonplace books so beloved of young ladies at this time. This she found contemptible and not to be confused with real poetry which was dignified, serious, sacred and pure. Her family accepted her interpretation of her vocation reverentially. Only her father was tempted to make the occasional facetious comment and he quickly came to appreciate that his daughter's poetry was no laughing matter.

Nobody at Hope End [the family home] sneered at or ridiculed the role of poet itself - in the first quarter of the nineteenth century poets were the most admired of all creative writers. The end of the eighteenth century had seen the beginnings of the Romantic Revival, marked by the publication, in 1798, of Wordsworth's Lyrical Ballads. In the decade of Elizabeth's birth Byron published his first collection of poems (Hours of Idleness,1807) and when as a nine-year-old she was starting to write poetry herself, Queen Mab. Playwrights no longer dominated the literary scene though Drury Lane and Covent Garden were still enormously popular theatres, and novelists, in spite of Jane Austen, Richardson and Fielding, had not yet begun to do so. To be a 'real' poet was judged a most suitable occupation by Elizabeth's parents who had no objections just so long as this did not tax Elizabeth's health.
Shelley had just finished

...public acknowledgement was important: she was honest enough to admit that it was not sufficient to write poetry but that having it read was part of the process. It was more than that. Seeing her work in print excited her and she did not underestimate the significance.  Her excitement had nothing to do with feeling she was successful - she rated popular success as shallow - but was more a feeling of intense joy here was tangible proof that she was communicating through her poetry.