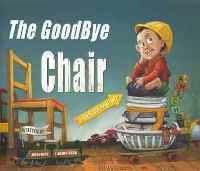 I've recently been sent a copy of Jo Carson-Barr's book for preschoolers, The Goodbye Chair. It's about Nicholas, who on one hand is excited that he's going back to see his preschool friends after a two-week break, but on the other is sad that his grandmother, who's been staying with the family, is going back home.

The story includes a kind of counting game, as well as couple of surprises on Nicholas' part at the end, when he shows his grandmother than he can count in Maori, and also use a little sign-language. (His Nannie has some deaf friends.) At the back of the book we're reminded that New Zealand has three official languages, English, Maori, and the New Zealand form of Sign Language.

I enjoyed the story. It's one most parents would be able to read to their children over and over (always an essential element in a children's book for me). But what adds hugely to the book are the attractive and fun illustrations by Carson-Barr's son, Simon Barr. At first reading they give an idea of the characters and their surroundings, but as you look at the pictures more closely you see there are a number of humorous additions to the story, imaginative things that Nicholas might be thinking (such as the flood caused by his Nannie's tears with its accompanying sea creatures), domestic details, and even some in-jokes that parents will appreciate, such as the train with the author's name written on it. This not only appears on the cover, but also inside the book, where the 'smoke' consists of cinema tickets.

Altogether an attractive book which should go down well with children and parents alike.