What Does Super Jonny Do When Mum Gets Sick?

I'm part of a group of Facebook where a number of New Zealand self-published authors get together to help and encourage each other, discuss problems and suggest solutions. I've only been with the group a few months, but it's proved very valuable. 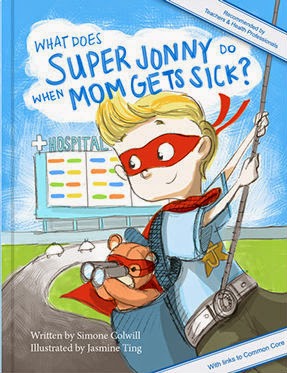 It's also helped some of us to promote our books a bit further, something that I'm also doing on Google+ plus with a different set of authors, ones who are rather more far-flung around the world.

Anyway I recently received a copy of Simone Colwill's book for children, What Does Super Jonny Do When Mum Gets Sick? It's about a little boy whose mother goes into hospital with an illness (the illness is unspecified in the book). The little boy, who sees himself as a superhero, asks How can I help?

A number of hospital workers, ranging from the doctor down to the cleaner, all say they can help, but Jonny wants to give each of them something of his own as well. Unfortunately, Jonny feels his offers are unrecognised. I offered to help, but no one would listen. Discouraged, he comes up with several imaginative but unrealistic options to save his mother. She tells him, however, that he's already helped; each of the things he gave away was useful to the various hospital workers, though not necessarily in the ways he'd envisaged. Ultimately, she tells him, his superhero hugs are the best thing of all.

The book's delightful illustrations by Jasmine Ting give the easy-to-read story plenty of zip and zing, characterise the different people nicely, and add their own quirky humour and detail.

Finally there's a page of suggestions as to how to use the book in different situations: schools, hospitals, doctor's waiting rooms and so on.

This is a book that children will enjoy even apart from the crisis of a mother being hospital, and parents and medical professionals will find valuable.
Posted by Mike Crowl at 8:53 am