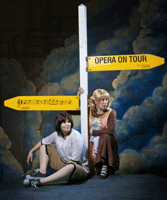 It’s amazing how people get older while you’re not looking. There’s a photo of a man in the new weekly newspaper, D-Scene, whom I knew when he used to come into the bookshop, probably back in the first years I was there – that’s nearly twenty years ago. He’s now 42, which is probably perfectly reasonable, but it’s as if a whole pile of years suddenly scuttled away.
And Ana James, the opera singer I used to accompany when she was only in her teens, is now 32 and has been married for three years. She’s currently touring New Zealand in a production of Hansel and Gretel, which for some reason isn’t coming to Dunedin. [That's her in the blonde wig.]
The problem with Dunedin’s theatre scene these days is that the Regent, which has a large stage and plenty of good backstage facilities, also has a huge auditorium, and for many middle-size productions, which this one probably is, it’s just too big. Too few people would attend to make it worth it.
Equally the Mayfair, while it’s a good stage (not so good backstage, but it’s passable) only holds around 400, which for some productions is just too few to make it worth putting the show on.
There’s been talk of having a theatre in between these two for many years, but nothing has come to pass as yet. Consequently perfectly good productions pass us by, or else they come to the Regent and play to half-empty houses.
Whatever numbskull decided that the middle-sized theatre we did have, His Majesty’s, should have been turned into a nightclub, is, I hope, ruing the day over and over. I wouldn’t curse such a person, of course, but I hope he’s got plenty of pimple cream to deal with what’s coming to him. (Just kidding!)

D Scene, the newspaper, isn't called that on its own website (!). It's just called the Scene. Rather confusing, since the actual paper definitely has a D in front of the word Scene.

And one other footnote: the play I'm involved in at the moment, The Voyage of the Dawn Treader, is going to be performed in the Mayfair. A piece of shameless plugging.
Posted by Mike Crowl at 8:39 pm