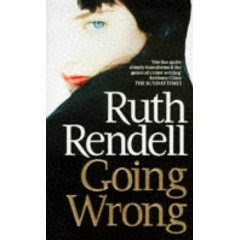 Had a bit of a splurge of novel reading over the last couple of days. From the tip shop I picked up a copy of a novel by Thomas Keneally called A Victim of the Aurora, and read it Sat/Sunday. Began a novel by Ruth Rendell which had been sitting unnoticed on our shelves for some time, and read it Sun/Monday. It’s called Going Wrong.
Both are odd stories, in their way. The first concerns an Antarctic expedition at the turn of the 19th century. A murder is committed at the base camp, and eventually the murderer is found out. But it’s hardly a straightforward murder mystery. In fact, the ending is more moral than you expect.
Rendell’s book is equally not your usual murder story. Its main character, through whom we see everything that happens, is a youngish man who’s made a mint in drug dealing in the past, and now is going straight - mostly. He’s besotted with a woman a few years younger than him, and misconstrues everything about her and her family by twisting other people’s motives. We can see the truth – generally speaking – but he, frustratingly, never

seems to. Again it has a more moral ending than we expect. To say more in either case would give the game away.
Both books are excellently written, stylish, and literate. They require the reader to think through the puzzles, which are quite dense in both cases – not so much in terms of clues as in terms of human behaviour. And in both cases we come to like the villain, because we understand them more than some of those around do. Rendell in particular makes it hard not to like her main character, even with all his inverse snobbery, his out-of-date manners, his inability to see things clearly. He’s human, underneath his wrongheaded behaviour, in a way that we can well sympathise with.
Alongside his mystery, Keneally gives us a huge amount of insight into living in the Antarctic before the First World War, while Rendell’s story is chock full of detail about the way people dress, drink, eat; what sort of furniture and ‘props’ they surround their lives with.
Posted by Mike Crowl at 9:45 pm