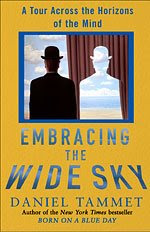 It's Maori Language Week, but apart from a couple of brief stints looking at the 'Greetings' section I haven't done very much. Mostly lack of time either at work or at home. (Yes, still sorting out the renovations!) However, there are plenty of ways you can work at Maori online, including the episodes of Toku Reo, from the television programme that's on every night on Maori Television

Here's the theme for this year, just for the record: "Te Reo i te Hapori - Māori Language in the Community."

On the other hand I have been reading Daniel Tammet's book, Embracing the Wider Sky, which talks a good deal about learning languages. Tammet is autistic, with Asperger's syndrome, but makes a very good case for his form of autism, in particular, being far less of a disorder than a bonus.

He's been inventing his own language since he was a child, and can learn enough of a language to speak it - within a week (!). He has a particular fondness for Icelandic languages.

On the maths side he has a theory that we are all born with mathematical ability, but because this isn't something we use as a matter of course - unlike language, which we all learn without thinking about it as children - few of us become as at ease with numbers as he is.

It's a fascinating book, and I'll probably be talking about it more in the next few posts.
Posted by Mike Crowl at 7:17 am

Nay, my friend: just wondered whether Master Tammet had taught you how to acquire a new language at speed :)

Regrettably, no. What works for him is unlikely to work for most of the rest of us, I suspect.