Rather slowly, over the last several weeks, I've been pottering away at writing some music to poems that have dogs in their text.  Some of them are focused on dogs in particular; in one or two the dogs are only part of the poem.

I'm onto number four at the moment, and may probably do as many as seven in due course.  The holiday in Christchurch we're just about to go on will put the project on hold for the meantime. 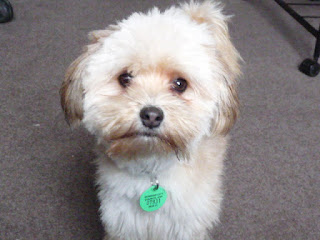 There are some great poems about dogs, though one of my favourites, by John Updike, Dog's Death, may prove to be too strong in itself for me to write any music to.  It's a wonderful poem that circles back onto itself, but by the time it reaches that conclusion, there's more heartbreak in the words than the first time we see them.

I won't note here what the other poems are as yet; I may change my mind about whether I use them all or not.  Up until a couple of years ago, before we acquired the dog, I probably wouldn't have bothered especially with dog poems, (anymore than I'd have thought of having dog garden statues) but having a dog changes your view about life - in a way a cat doesn't seem to...or at least none of the cats that we've ever had.
Posted by Mike Crowl at 11:46 am