Recently I wrote about a walk in which we discovered Braeview Crescent; it was just one of a number of decent walks we've been doing of late, walks that may be up to seven kilometres long and/or an hour and a half (or more).  Some of the time we've used the Intriguing Dunedin Walks books, but over the last three days we've done walks that we've just discovered for ourselves.

On Thursday we left the car opposite where the Monarch is berthed, down at the wharf, and did the old Crowl family trick of turning left, then right, then left again and so on. Nearly seven kms later we'd got all the way to the University area, walked around some of it and come back to the car via a different way.

On Friday we did a rather more adventurous - and more exhausting walk.  (The Thursday one had been almost entirely on the flat.)  This time we parked near my son and daughter-in-law's place in Helensburgh Rd, climbed up the street to discover that Wakari Rd ran across the top, walked right along that road for quite a distance (doing detours into Caleb Place and Joshua Place - yes, I know - and discovering that one of them had a little walk through a private garden that was open to the public).  Then, in due course, we went down Polworth Rd towards Burma Rd, which runs through the Ross Creek reserve.  We thought we'd give ourselves some variety and go through the bush, but the track we were on dropped off a small cliff in two different places, which wasn't ideal - so we backtracked onto Burma Rd, found the usual track that we've been on before and climbed back through that until we reached Cannington Rd.  Thought we'd be clever and take a shortcut through the golf course - and managed to, though with the dog in tow it seemed likely we might suddenly get thrown off the green.  Managed to find a gate to climb over and then did the relatively heavy climb back up to Helensburgh Rd.  Had a cup of coffee with our daughter-in-law after around two hours walking...

Today went out to Tomahawk, and climbed up it until we reached Centre Rd, which we then proceeded to climb until we'd done 3.5 kms of climbing.  What views!  The sea on one hand, the lagoon on the other, Saddle Hill in the distance, Brockville at the same level, fields, cows, horses, sheep (pong!).  All made all the better by a glorious sunny day.  Plainly the wind is strong up that way, however, as the macrocapras were bent almost completely over in places.  We were going to climb up to the monument that sits on one of the peaks, but there didn't seem to be a road to it from Centre Rd, so we went as far as the bend and came back again.  Got in the car and went back up to the Tautuku turn-off, and discovered the most wonderful old stone house down at the water level.   We'll have to do the Tautuku walk another day. 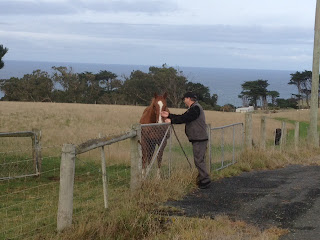 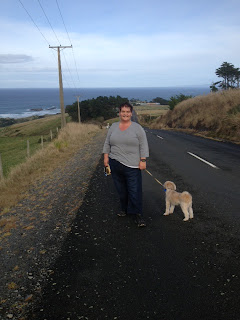 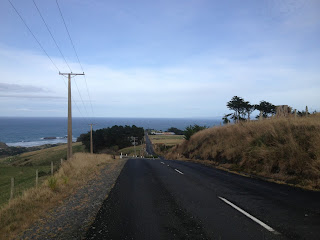