A slightly longer - and steeper - walk than intended

The rain has been threatening on and off all day, and has now arrived, and brought a very cold front with it.

When we were out walking this morning, around nine, there were some heavy black clouds, but they didn't come to anything, thankfully, so we managed an hour and twenty minutes stint.  It had started off as just a moderate walk, with us intending to stay on the flat in South Dunedin. I suggested doing what we used to do with our kids (in the car, usually) of taking a left turn then a right then a left, and so on, and seeing where it took us. We parked in the road parallel to Burns St (where Carisbrook is being demolished), turned towards St Peter's Church and then hived off into the wilds of South Dunedin, eventually coming out onto Forbury Rd. Allandale Rd beckoned, and my wife, now enthusiastic to get as much exercise as she could, turned up there. The next left took us towards a No Exit, but there was another little street that brought us into Norfolk St, and there, ahead of us, were the 279 steps leading up what's known as Jacob's Ladder.

So we climbed them, twenty or thirty at a time, having a breather every so often and looking at the views, which became increasingly spectacular the higher we got. Halfway up or so, there was a gate - presumably a back gate to a property that had its frontage on a real street.  Someone had attached a painting to the gate, and somehow this painting has withstood the weather.  [See top picture.]  The artist is someone M. McNeill and it looks as though the picture was painted in 1970.  If that's the case, it's got a very resilient sealant on it. 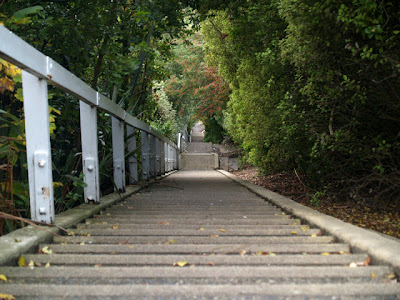 At the top of Jacob's Ladder, in Allandale Rd (again) we stood and checked out the view (again), chatted to a couple of dog owners that passed by (while our dog chatted to the dogs) and discovered, a little further down the hill, a lovely house with a wonderful garden - a huge garden in a kind of scooped-out bowl in the hillside.  Magnolias, rhododendrons, blossom trees, and a host of other delights; a little bridge over a little stream, and cacti growing in the glasshouse.  Walking certainly allows you to discover things you've never known about in over sixty years in a city.

We also found that there's an enormous old brick house at the end of Coney Hill Rd.  I presume the road was originally just the driveway leading up to the house, which commands wonderful views over St Clair and the ocean.  I don't know anything about this house, but no doubt it has some history.

Back to the car, by a similar route, with sore thighs and feet.  But very satisfying.

The photo of Jacob's Ladder comes from an online album - it was taken by someone who only identifies himself as Gary.
Posted by Mike Crowl at 5:31 pm

Hi Mike, I have researched the history of the big old brick house in Coney Hill Rd. Let me know if you want to know more. Saltarelo@xtra.co.nz