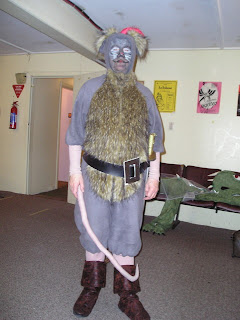 First performance of The Dawn Treader this morning in front of a fairly quiet audience of school children. They laughed at a couple of things early in the piece, and then seemed not to get much humour out of it after that, which was a bit of a surprise. I think a lot of the humour is geared at adult understanding of language and such, and may have gone over their heads. Or they may just have enjoyed it all in a quiet way!
Don’t know what they thought of the five and a half foot mouse, except that the applause at the end was okay (he’s described as being two foot tall in the book). You can see photos of an actor called Warwick Davis playing Reepicheep (in the tv series) - he's closer to the right size, though I think I prefer my costume to his. That one looks all-enclosing and rather too fluffy to my mind. Warwick Davis also played the Goblin bank teller in the first Harry Potter movie.
In general the actual performance today went well, but it’ll be interesting to see how it goes in front of an older audience.
No major disasters, which was a relief, and all the scenery managed to get into the right place at pretty much the right time without hold-ups. Eustace was left burbling on a bit at one point, but not for long, and one of the ancient sea captains didn’t make it on stage for his couple of lines, so the other two captains covered for him. (He has to make a very quick costume change, and just didn’t get there.)
I sat down this morning about seven o’clock and wrote out a resume of the scenes, just to get them better into my head. Apparently everyone is having the same trouble trying to remember what comes next at certain points in the play – it probably differs for everyone, and may even differ from day to day. Yesterday, for example, I managed to miss getting on in time for the ‘water’ scene, having got left holding the chess board (and blue-tacked-on pieces) and finding nowhere to put it down, or no one to give it to. It’s not been a scene I’ve missed before.
We’re still making changes to the thing: the director has just rung me up to say we’re getting rid of the ‘waterfall’ – it’s only on for about thirty seconds (if that) and it causes a need to shift the infamous poop deck out of the way yet again, and then put it back. For the sake of some quiet at a moment that needs quiet, we’ve made alternative arrangements for Reepicheep’s departure from the play.
It’s amazing how insecure even amateur actors get. If we don’t get feedback we think we’ve done badly, even when we know in ourselves that we haven’t. It must be something to do with putting yourself out there in a vulnerable way; you’re kind of opening yourself up to the public, making a kind of fool of yourself. And if you don’t feel as though anyone’s thought it was all okay, you immediately drop into some ‘I’m terribly insecure hole.’ Well, I guess you have to just run with that, and keep on pluggin on!

The photograph is of Reepicheep (holding his tail for some reason - maybe to display it to the photographer). Taken this morning while he was offstage for a few minutes.
Posted by Mike Crowl at 8:18 pm