The loss of storytelling

At the Berlin festival one thing became obvious – we’re a little old to be embarking on what is a new career for us both. Young people should be making low-budget documentaries. Passion and obsession should be the preserve of those with energy to spare. We’re grandparents and we like to sleep, while we really don’t do well in the two-star accommodation kindly provided by the festival.

And yet we found ourselves repeatedly in conversations about our increasingly technical world – which is clearly the preserve of the young – and the loss of storytelling. At dinner one producer wondered if in fact we were in the grip of a cultural autism. As she saw it, the more technology (and thus budget) a film requires the more it appeals to and tunes the left-brain. And that’s perhaps what I hated most about Avatar – all that film wizardry in service of itself, instead of story.

The trick of course is to harness the fantastic benefits of the digital world to the needs of the heart to make intense, emotionally connected films. That’s certainly our goal. And one of the benefits of going to Berlin with This Way of Life was the solidifying of that purpose. Vive l’obsession!

The documentary, This Way of Life features Peter Karena, his wife Colleen, their six children and many horses who live almost wild in the stunning beauty of New Zealand's rugged Ruahine Mountain 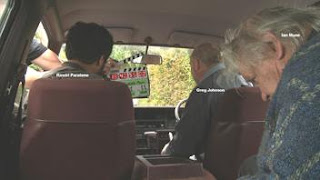 s. Until, that is, Peter's escalating battle with his own father has profound consequences for the whole clan.

PS - If you want to win a piece of film history, go to the Trade Me auction featuring a vehicle used both for transport of crew and stars in the movie, The Insatiable Moon. (Pictured at left)