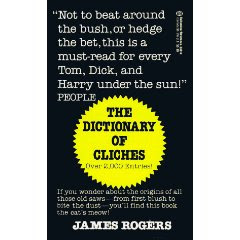 Just found this delightful compilation of cliches in one of the reviews of The Dictionary of Cliches. What's most interesting is how old many of these well-worn phrases are.

The paragraph was put together by Victoria Tarrani
Posted by Mike Crowl at 9:05 am