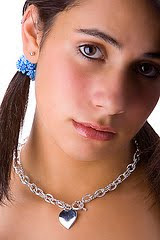 Rosacea is more than pimples, though pimples come into it...in fact it's known as the 'curse of the Celts' because many Irish and Scots people suffer from it. This skin irritation leaves distinctive blotchy red patches in certain areas of the face, typically across the nose, cheeks or forehead.

However, on a site discussing treatments for rosacea, instead of showing us a person whose face has obviously been affected by the skin irritation, we have the usual smiling model [such as the example on the right] whose face has never known acne, let alone rosacea.

Some famous people who've had rosacea include Bill Clinton (did you ever notice?), J P Morgan, W C Fields (you thought it was because he'd been drinking, didn't you?) and Mariah Carey.

Well, there you go. You learn some things every day. If you're curious enough.