This shows how thick I can be. It never occurred to me till just now that the 'c' in cello is pronounced differently to the 'c' in cellophane. No wonder my Turkish student who's learning English throws up his hands in despair at the way we change the sounds of both consonants and vowels. There are good historical reasons for why we pronounce some words one way and some another, but they're not much help to us living in the present.

The other day we had a typical example: he asked me if got was pronounced as good. In know-it-all fashion, I said having two 'o's in a word meant it was a long sound, so good was pronounced as goooood, and got as a simple got. (That's not actually how I said it, but that's the gist of it.) And then I realised we had just read the word flood. Where is the long ooooo sound there? Pooooooh.

I only got onto all this good discussion just now because I was looking up references to cellos in my clippings. I actually wanted to find cello case as a phrase, but it wasn't there, though of course both words were there individually. And while I was skimming through the clippings I found one on the composer John Jeffreys. A friend of mine had lent me a book of songs by this composer early in the year, and I played through a number of them. They were handwritten (and photocopied) rather than engraved. Jeffreys himself had done the writing, and was an exceptionally neat scribe.

Most of the songs seemed to be for the tenor range - which is why my friend had the book of course, he being a tenor. Apparently the English tenor Ian Partridge is amongst those who have striven to bring Jeffreys' name back into focus again. Jeffreys, who died in 2010 at the age of 82, wrote in a style that was regarded as too traditional, and his music went out of favour. However, if the songs I played through are anything to go by, 'traditional' is hardly the word. There are plenty of interesting chords and the vocal lines requiring someone who knows what they're doing. One writer describes Jeffreys' style as 'overtly romantic and non-modernist, very much in the tradition of Delius, Warlock and Vaughan Williams.'  Well, they're all still going strong.

Anyway, this going out of favour so discouraged Jeffreys that he destroyed copies of a symphony, two violin concertos, a cello concerto (that was how I came across the clipping again), a string quartet, a piano sonata, and some 200 songs. That's some reaction against being not in favour.

Fortunately at some point he'd tape-recorded most of the songs, and, in a better mood at a later time, he was able to reconstruct these. Some of his orchestral music is still available, on a disc called Idylls and Elegies. You can hear a 90 second sample here. It's far too short a sample. 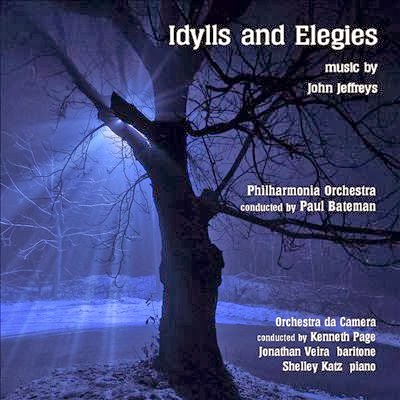 I can't imagine destroying your own music, except for stuff that you know in your heart of hearts isn't worthy of being kept. Destroying it because you don't think people appreciate it isn't wise. None of us know our own value as a composer or writer - we may have some sense, but it takes acknowledgement by a wider world to get perspective. Problematically, that perspective may wax and wain in our own lifetime, if it comes to fruition at all. Van Gogh is the well-known example of someone whose art was not at all appreciated while he lived, and a number of other writers and composers never saw their work printed or performed while they were alive. As an artist you may have to suffer that indignity too. All you can hope for is that your heritage will live once you're gone.