Well, it's taken a lot longer than I intended, but the ebook of Grimhilda! is almost ready for publication. Just a few aspects still to be dealt with and then it'll be off to Amazon Kindle for them to do their bits of sorting out, and the book will make its way out into the wider world.

I had intended that the book would be ready last year, not long after the musical was presented, but it turned out that adapting a stage script and turning it into a novel was a bit more of a task than I'd imagined. The first draft was very close to the stage script in many ways, and I had to rethink things, expand my view and get away from what I'd been watching night after night on stage.

Then procrastinations set in, and delays caused by 'more important things' and so poor old Grimhilda! mark two went on the back-burner again. It's been her major failing in life.  She first turned up in the world over thirty years ago, and had a struggle to come to full term, as it were. Anyway, after many fits and starts she's just about there.

I just clicked on the #Grimhilda on Twitter, and was surprised to find that someone had sent this tweet back in November:
υиα єтєяиι∂α∂ ‏@emarina14 24 Nov

Unfortunately the instagram link no longer works, and the Spanish (I think it's Spanish) translates as something along these lines - according to one translation site:

Wanting to make the morning to return to the stage!
With the desire to be wholegrain to return to the scene !
With desire of which it is maňana to return to the stage!
I like the middle one best. Of course, it could be that I'm getting a Spanish site to translate Portuguese or some other variation of the tongue.
@emarina14 supplied a photo - of herself, presumably - as Grimhilda (I guess!). I hope she won't mind me copying it here.  This is a more conventional witch than the one who appeared in our show - or is imagined in the book. 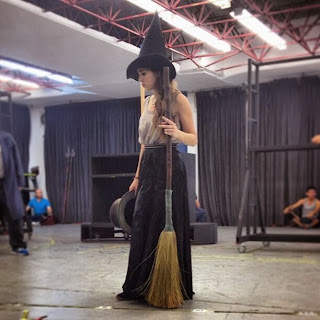 I don't think there's any connection with our musical/book, though it's intriguing to come across this all the same.  Here's a picture of our Grimhilda [Helen Wilson], as she appeared in the Dunedin production: 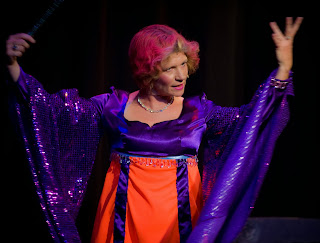 I've just looked up that other hashtag #TeatroGuimera. Apparently this theatre is located in Santa Cruz de Tenerife in the island of Tenerife in the Canary Islands (Spain) is the oldest theater in the Canary Islands. So at least I was right about the language. Here's the theatre's own page.
Anyway, back to the book.  It'll be available - at least initially - for Amazon's Kindle, so you'll be able to read it on any of their devices, or on the iPad, or on most smartphones.  That should cover a few bases!
Posted by Mike Crowl at 12:07 pm