Couldn't resist putting this photo on here, after my comments about sheet music in the last post. 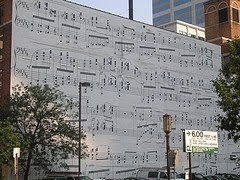 It looks like something that's been photoshopped, but apparently it's for real. (It was taken by 'Tape') It's in Minneapolis, on the former Schmitt Music Building. Another Flickr.com photographer (I think they go under the pseudonym of O So Lazy Susan) has a heap of pictures of it from different angles. This photographer notes:
This musical mural is believed to be sheet music from a portion of Maurice Ravel's "Gaspard de la Nuit" in downtown Minneapolis, Minnesota. I heard there was some major copyright issues once upon a time, but that is just a rumour. Schmitt Music used to be housed in the building. The music store is gone, but the mural remains.

I'm glad people are photographing this, because it's just the sort of thing some demolition person would come along and destroy in a matter of moments.