Working to the script 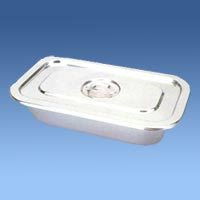 It's not easy to drag in a comment about a stainless steel drum when you're intending to write about actors and playwrights and the theatre. Though if I go to a different kind of theatre - that is, the one in a hospital where operations are done - I can find a connection: there you'll find dressing drums and stainless steel kidney trays, and yikes! catheter trays. Please don't remind me.

A short while ago I came across an unusual interview with actress Laura Linney. Each question had been posed by an email correspondent to the New York Times.

Someone asked: How does being the daughter of a playwright impact how you approach a stage role, if at all? and Linney responded:

Oh yes, it certainly has influenced the way I read a play, or any script for that matter. I am very aware that playwrights, particularly good ones, have an intention for everything they write. Language and punctuation is used specifically, and most of the time actors can find wonderful clues about character in the rhythm and cadence of the language used.

I tend to approach everything with story first. Every choice I make I hope will feed the story and flesh out the narrative.

It's an interesting response; there are some actors who don't seem to find the original script that important, and substitute words of their own - or worse, there are directors who encourage them to do so.

In their book, Notes on Directing, Hauser and Reich note in their 25th point: Director Lloyd Richards said that if you [the director] continually find yourself itching to make changes in a script, consider whether you should give up directing and take up playwriting.

I've just been reading another book on the theatre - Talking Theatre, by Richard Eyre. It's a series of interviews with about fifty famous playwrights, directors, designers, actors, and others. More than once the comment is made in relation to Samuel Beckett's plays that even the punctuation mattered - if there were three commas at a certain spot in the dialogue, it meant a longer pause needed to be taken. Beckett's writing was so precise the actors could rely on it to work if they followed the instructions to the letter.