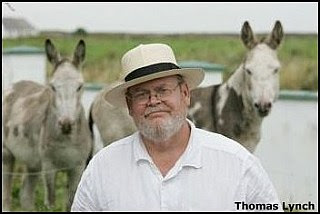 I've been reading a book on death and dying lately, The Undertaking. It's by Thomas Lynch; he's both an undertaker and a poet. The book looks at death in detail, and from a number of intriguing angles. I'm going to copy a few extracts from the book into this blog soon, since not only can Mr Lynch write very stylishly, he has a lot of good things to say about his topic.

Why read about death? Well, as you get older, and find you've outlived more and more people, you know that somewhere along the line, there's more than a distinct possibility that you will join them at some point. So it's useful to think about it a bit more seriously.

When you're young, you think death is so far in the future that it's not worth thinking about, or else that death is an impossibility. It could never happen to me. I suspect that more than a few young suicides think that killing themselves isn't actually a real thing; they'll wake up in the morning and carry on with their lives like they have for the last 16-20 years.

We all think like that, in a way. Unless there are definite and even disturbing signs otherwise, we all climb out of bed in the morning not in the least surprised that we have another day up our sleeves. But lurking in the back of our minds - our 65-year-old minds, anyway - is the knowledge that like it or not, we ain't gonna be here forever. It's scary, strange, uninviting, and hard to grasp. 'Death pulls towards acute dimensions' says Les Murray in one of his poems, by which I take it he means that death sharpens the mind considerably in regard to the things of this world - all that stuff we're so familiar with.

Check out the next post for an extract from Lynch.

Photo courtesy of ThomasLynch.com
Posted by Mike Crowl at 5:36 pm