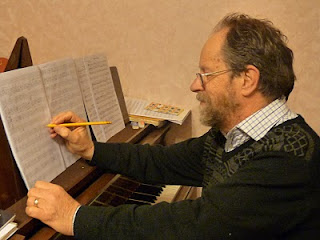 Back in the days when I was still thinking acne treatments might be of some value to me, a friend and I began to write a musical. We were still in Secondary School, and we knew no one else who'd written a musical.

It never got past the first half of the first scene, though I remember it did have a song that began, 'It is raining in Siam' and went on to bring New Zealand into it somehow, a name that proved remarkably difficult to rhyme with.

The only thing surviving from that attempt at collaboration is a song called Wishful Thinking, which I wrote both the lyrics and music for (so obviously the collaborative aspect didn't go far). It was written without knowing where it would fit in the musical or who would sing it. In spite of the fact that this song was written way back before I left school and before I knew how to write an accompaniment to it, it has survived in my memory, and I can sing it to this day. Not that anyone wants to hear it.

Some years later - I think it was after I'd conducted a children's 'opera' for a local entrepreneurial young producer (he'd only been out of school himself for a couple of years perhaps) - I hit on the idea of writing a children's opera. In a great burst of creative energy, I wrote both the libretto and music as I went along and completed some twenty minutes or more of the piece.

And that's where things stopped. For more than thirty years. When I first bought the Sibelius music program (sometime early this century) I had another burst of creative energy, and transcribed onto the computer most of the music I'd ever written, including those twenty plus minutes of the children's opera. What's more, I orchestrated it as well. And again things languished.

I kept wanting to complete the thing, and wrote another whole scene, and orchestrated that as well. And then....well you know the story by now. This year, having seen 'children's opera' come up again and again in a my list of projects, I decided to help myself get this thing off the ground.

I asked a friend to act as collaborator on the piece. She's been involved in all the Narnia productions (with one exception, I think) not only as an actor, but has also assisted in the script writing and pre-production work. As well as making props, often from scratch. She has an innate good sense of what works on stage and what doesn't, and more than that, she is very concerned that the structure and the plotting of the thing makes good sense.

I'd gone into this process with the idea that what I'd written would be our starting point and I'd just 'finish things off.' Nope. We've gone back to square one and recreated it from the beginning. There are elements of the original story: much of the opening is still along the same lines except that it's been developed more broadly; only four of the characters remain the same - the rest have either been dropped or altered; new characters have been introduced as well as new approaches to the way the story functions. The entire script has been rewritten, and the idea I had initially of it being a composed-through piece (that is, there's music and singing throughout) has been laid aside in favour of a more accommodating music, singing and dialogue approach. One scene I've just written has no singing in it at all, although there'll be some music underpinning it.

And last night I came very close to finishing the first draft of the script. It was my goal to finish it this weekend, and I will. We've already hammered out changes and re-thinks of many of the earlier scenes, but there's still a good deal of work to be done on refining the script itself. And then comes the music, of course. I wrote some music the other day for the chorus to sing at the beginining of the third act, and I know what I'm going to do for opening music (about a minute's worth before the curtain first goes up) - and I may even be able to salvage or re-use other odd bits. But essentially the thing is a re-write.

I'd hope to get it produced next year. Time will tell. In the meantime, things have made great progress in the last few months.

Photo taken by my wife of me writing music the hard way.
Posted by Mike Crowl at 6:51 pm