One of the fun things about Google desktop, and also about Evernote, the programme that allows you to store virtually everything you like via Cloud, is that if you put a particular word in you can come up with all sorts of things: things you've forgotten, or things you didn't know you had.

For instance in relation to the word, 'insurance' which I checked out because I wanted to put in a link for rv insurance quotes, I came across three items, all unrelated, and all of interest. Firstly there was this footnote to one of Jason Goroncy's recent blog posts - in this case on the subject of holiness. The original quote comes from William Stringfellow.

And with that succinct piece of theology we move to quote number two, this time from Seth Godin. It comes from a post he wrote in Feb 2010 called Phoning it in and he began with some concern about a minister of religion who told him that some days she just works...

The third reference to 'insurance' (I'm sure there are plenty more, as Google desktop came up with several pages worth) comes from a draft of a blog post I'd written which doesn't appear to have been published....

I stood outside my house with two of my neighbours the other day discussing the tragedy of teens committing suicide. Apparently there was an Internet ‘pact’ made by about twenty local teenagers to commit suicide on Christmas Day. Horrific. Thank God it didn’t go ahead, for whatever reason, but one of my neighbours was going to a tangi for one teenager who did commit suicide at Christmas. And talked about another who’d killed herself because of text message bullying. The girl who’d done the most bullying had turned up at the tangi for that girl, which my neighbour thought was actually brave…but then had killed herself a few days later.

It’s unbelievable. The other neighbour and I felt it was that these kids don’t have a sense of the reality of death, that once you’re gone, you’re gone. I remember years ago a boy hanged himself because he’d had an argument with his father. Hanged himself! Why would you go and do that to spite someone? There’s some strange evil process at work in all this. I feel that it’s more than just kids deciding this is the thing to do. Behind it, I sense, there’s a supernatural factor that’s inciting this kind of unreasonable behaviour.

And then there are kids who kill themselves on the road. You can kind of understand this better: kids have far less judgement in cars than more experienced drivers. They have a sense of being bullet-proof, and time and again they’ve proved their not. I noted that there was a site in the States where they have a number of tips for teenage drivers. Getting the teenagers to pay 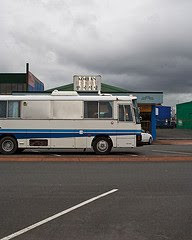 To go back to the original phrase that inspired this digging around in my computer: rv {recreational vehicles} insurance quotes. You hear a lot about rvs on the Internet, but they're not something that New Zealanders tend to have much to do with [though the photo on the right was taken in Rotorua, NZ]: we lean towards converting old buses into the equivalent of an rv, sometimes in a superb way.

Most of my experience with rvs comes from the movies - Sandra Bullock, desperate to go to the loo, boarding an rv owned by total strangers; or Jack Nicholson watching the stars while sitting on the roof of an enormous rv he and his wife had bought just before she unexpectedly dropped dead doing what she was passionate about: cleaning...and many more. The way rvs get treated in the movies, they'd need massive insurance, I'd think!
Posted by Mike Crowl at 4:10 pm