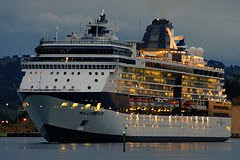 My brother-in-law and his wife are just off on another cruise - to Hawaii. Apparently they've just been on a cruise - to Hawaii - but due to storms couldn't stop off at most of the ports. So they're going again. It was cheaper than flying there!

Seems that if you book a cruise while you're still on a cruise, you get a discount cruise. In fact, that's what they did a few years ago while they were on the cruise that brought them to Dunedin, where we live. (That was the first time I'd met either of them, and the first time my wife had seen her brother in some forty years.)

They came for a day. Such is the nature of cruises. And then went onto Auckland for Christmas Day, and found everything closed...

Friends of ours recently went on a cruise around some of the Pacific Islands. One of the various cyclones that's been floating around recently decided that it would blow, and so they missed visiting several ports as well. However, they haven't rebooked...at least as far as I know. Considering the number of photos on Facebook, (some 400), they had a pretty good time - without visiting ports.

Cruises obviously appeal to a great number of people - we're having half a dozen cruise ships visiting our city this week alone. I'm not sure that I'm one of the people cruises appeal to, though I haven't been given the chance to find out, as yet.

Maybe in my retirement - if I manage to actually have one - and if someone passes on a good deal of spare cash - I'll get the chance, and see what they're really like.

The photo was taken by a friend of mine, Stephen Murphy, and shows a cruise ship at Port Chalmers, our local port.
Posted by Mike Crowl at 7:01 pm