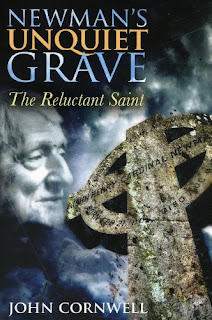 Many years ago, I was given a biography of Cardinal John Henry Newman to read by the priest who ran a Catholic library in London, after I'd asked (in some frustration) for a book on someone who was a 'modern' saint. Newman, by that time, had been a long time dead, so I'm not sure that he could be classified as 'modern'. by which I'd meant 'contemporary.' However, the biography, which ran to two volumes, was very interesting. Here's a quote from a recent review on a biography of Newman that focuses on his literary achievements.

It was also at Oxford that Newman was to develop his prodigious talents and astounding work ethic. (He recorded having once written for 22 hours straight while working on his Apologia.) Cornwell dubs Newman a "superabundant literary workaholic." While preparing to take his honors examination, he sometimes read fourteen hours a day.

From Newman's Unquiet Grave, a review of John Cornwell's book of the same name, by David J Michael.
Posted by Mike Crowl at 1:50 pm