Out this morning to watch part of my grandson's soccer game (he scored a goal, obligingly, while I was watching) and to walk the dog from Chingford Park to the Gardens shopping centre and back.   We'd been out with my son and his family last night - they shouted us a meal (paid for it, in case you're not familiar with the term 'shouted') - and he was saying that it seemed all we do was sit in front of computers and screens and hand-held devices and we never seemed to get out into the real world.  So I did some real world stuff this morning and walked the dog for nearly an hour, and watched 14 boys and a couple of girls play soccer.  The real world proved itself fit and well and able to provide a chill factor of I-don't-know-what, but it was pretty cold if you were standing still...which I wasn't because I was walking the dog, at least initially. 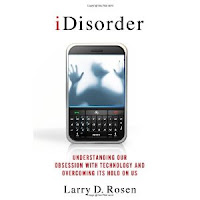 Curiously enough there's a review of a book in the ODT this morning saying the same sort of thing as my son. The book is called iDisorder: understanding our obsession with technology and overcoming its hold on us.  Personally, if the book's anything like its subtitle, I suspect it's slightly overstating its case.  Yes, we do spend a lot of time in front of screens - for some of us that's our job (or has been) - but the real humans in our lives seem perfectly capable of getting our attention when they want to, and we theirs.  The real world is fit and well, I think.  I've had lunch with two guys this week, and coffee with a third, along with the meal we had out last night at which there were eight of us (and two iPads, and three iPhones).  I also spent two plus hours at the Dental School this week with real patients and real dentists (and was reading a non-Kindle book as well).  Last Monday I played at a concert for people in the Stroke Club.  We're going to see the Nuggets play tonight, and heading off to church tomorrow (where we'll assist with a very interactive church lunch) and then in the late afternoon I'm going to sing at Sunny Side Up's practice.   And if you'd asked me I would have thought I spend quite a bit of time in front of screens.  Perhaps I'm not so technology-obsessed as it seems.

Seems like I have plenty of real life pedestrian bridges to the outside world.

Anyway, that wasn't really what I was going to talk about.  I was going to mention a couple more movies that I've watched this week - yup, both on screens (!)  The first of these was a fairly recent sci-fi style movie starring Jake Gyllenhaal (pronounced jill-en-hall, according to imdb.com).  It's called Source Code, and involves some real flimflam science (told us at considerable speed so that we don't have time to think too hard) about the brain having eight minutes of leftover information that can be accessed after a person has died.  Considering that the brain can't even retain more than seven numbers in its short term memory, on average, retaining eight minutes of not especially important stuff seems unlikely.  But the filmmakers manage to get away with this by having poor old Jake repeatedly going through the same sequence of events over and over in order to find out where a bomb has been planted on a train.  There's more to it than that, but I won't spoil it for you.  This is a movie worth watching, because it has some nice surprises.  And no bad language (it occurred to me after I'd been watching The Social Network the other day, that no one swore in it, or if they did it was fairly mild.  Which just goes to show that scriptwriters don't have to include endless foul language just because people in real life use it.)

Jake's supporting cast includes the delightful Michelle Monaghan, the versatile Vera Farmiga, and Jeffrey Wright, who manages to overcome the fact that the scriptwriters keep on avoiding having him telling the truth about what's going on, and who is saddled with a walking stick and glasses that seem to serve no functional purpose except to show he's a (slightly mad) scientist.

The other movie was The Searchers, the old John Wayne/John Ford combo that had a depth and sensitivity in it that wasn't always a feature of Wayne movies.  He plays himself, as always, succinct in speech, mostly unemotional when others are losing their cool, obstinate and determined.  But he's in a story that's mostly strongly written, and is surrounded by a superb cast of Ford regulars and sundry others who do a great job.  I saw The Searchers years ago, but so strong is the long opening sequence that most of it remained in my mind.  In this section, Ethan (Wayne) returns home to his brother (and his brother's family) after years of being away in the American Civil War.  He's enthusiastically greeted by all the family: his sister-in-law, his two young nieces (one a teenager, the other around ten), his teenage nephew, and Martin Pawley, a part-Indian youth who's been adopted by the family (he's played very well by Jeffrey Hunter - who would one day play Jesus Christ in King of Kings).  This group of people are beautifully drawn and we become fond of them in the short time we get to know them.  There's a brief interruption as Ward Bond and his Texas Rangers come for a coffee.  Bond is loud and shatters the quiet of the family with enthusiastic ease, and each of his Rangers is a character in his own right. We become more familiar with them as the film goes on. They've come to report that Lars Jorgenson's cattle has been rustled by a group of Comanche, and Bond co-opts Ethan and Pawley into his Texas Rangers posse to get the cattle back. They leave, but by evening there's something ominous in the air.  A murdering bunch of Comanche come to the isolated farm and wipe out all but the two daughters, whom they capture.  The leader of these Indians is actually played by a German-born actor, known by this time as Henry Brandon, but born as Heinrich von Kleinbach.  (He played an Indian in another Ford movie as well.)

The rest of the film relates, for the most part, to the long search that Ethan and Pawley undertake in order to bring back the two girls.  At first they're accompanied by the older girl's boyfriend (played by Harry Carey Jr - he turned up as an 'old timer' in the last of the Back to the Future movies); he's the son of Lars Jorgenson.  When finding out that his beloved has been killed by the Indians he races madly into the Indian camp and is killed.  There's an interlude in which the two men come to the Jorgenson farm some time later and we learn that Pawley has been the long-time boyfriend of the Jorgenson daughter (played by Vera Miles, with great energy and gusto).  She almost persuades him to stay and become a farmer in partnership with Jorgenson, but the call of the search draws him away again.  By the time he returns she's just about to marry another fellow played by Ken Curtis with an over-the-top 'gosh gee' manner.  The wedding that doesn't happen is one of the less tense and more hilarious scenes in the movie.

Eventually they find the Comanche again, and eventually (after five years!) they rescue the girl, who's now a teenager.  There's some debate about whether she'll survive the actual rescue, given Ethan's rather ambiguous attitude to her, but she does.  (She's played by a young Natalie Wood, and in the only moment of real inauthenticity in the movie, she appears with lipstick and plucked eyebrows and mascara, in spite of having been part of the Indian tribe for several years.)

It's a long movie, with plenty of time for detail, particularly from the excellent cast.  (There's even a late addition to the characters, a young Cavalry lieutenant, played delightfully by one of Wayne's own sons, Patrick Wayne.)  The scenery is magnificent, much of it in Monument Valley, the place that frequently appeared in Ford movies.  The photography is superb and the colour is as up to date as a modern movie.  And it's full of humour, with Ethan's 'That'll be the day' being the laconic answer to several angry outbursts from other characters.

The five-year search might seem a bit over the top as an idea, but somehow it's made to work.  Wayne's attitude of stuff-everything-else is a great part of that workability.  And there's no doubt, in the light of this movie, that he was one of the great Hollywood stars.