Moonwalking with Einstein by Joshua Foer has one of those eye-catching titles that publishers love (Driving with Plato, for instance) but which actually have little to do with the book's contents.   In fact it wasn't the title that caught my eye, but the subtitle: the art and science of remembering everything.  I've read a number of books on memorisation, and, since I'd been given a gift voucher for Marbecks by the cast of Grimhilda! I thought buying and reading another book on the subject (for free, as it were) wouldn't go amiss.

I'm glad I did, though initially I thought the book might just cover the same ground as many others.  At one point, Foer discusses an interview he had with Tony Buzan, the guru of memory work, and a person Foer doesn't seem to have too much time for.  He quotes something Buzan's chauffeur said about the writer's 120 or so books: Same meat, different gravy.  (I wonder if the chauffeur still has a job?)  Same meat, different gravy is pretty much how I've felt about Buzan's books too.  Not only does he uplift from writers of the past about memory work, but he repeats his own theories, and promotes his system of Mind Mapping to a great extent.  Foer notes, in relation to Mind Mapping: my own impression of Mind Mapping, having tried the technique to outline a few parts of this book, is that much of its usefulness comes from the mindfulness necessary to create the map. Unlike standard note- taking, you can't Mind Map on autopilot.  My sense is that it's a reasonably efficient way to brainstorm and organise information, but hardly the " ultimate mind- power tool" or "revolutionary system" that Buzan makes it out to be.  (page 206).  That's pretty much my own feeling about Mind Mapping, though Foer does give examples of its very positive use in at least one particular environment. 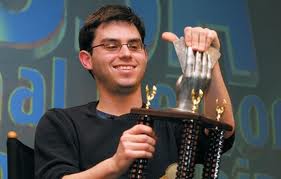 Anyway, the book is only partly about Buzan (he's unavoidable if you're writing about memorisation), and apart from him Foer charts a great deal of territory that was unfamiliar to me.  He does write about doing memory work, and some of the techniques are familiar, but the rest of the book is full of intriguing real-life characters.  Foer began his interest in memorisation when he covered the US Memory Championship.  He became somewhat obsessed with the subject, and amazingly, a year later he was able to enter the Championship himself - and win!

Foer's mentor was an eccentric 25-year-old Englishman called Ed Cooke, a grandmaster in the International Memory Championships.  Foer was trained in the techniques of memorising as required for the US Championships, as well as being given a good deal of advice about the whole process of what it takes to train your memory to remember.   Foer was able to go to Cooke's home in the UK more than once - each occasion is a highlight in the book.

The book swings between narrative and discussion of the processes of memorisation - and the necessity of it, something that Foer and the others regard highly compared to those in charge of education in general.   Memorisation of material (especially stretches of important text) leads to greater understanding of your world and the culture you come from.  It's not surprising that the lack of training children to memorise has resulted in youngsters leaving school with a minimal understanding of who they are in the wider scheme of things.

There's an interesting section on savants, in particular Kim Peek (the original Rainman, who at the time the book was written had been memorising the telephone books in his local public library for ten years, and who had an extraordinary range of facts at this fingertips) and Britisher, Daniel Tammet, who I've written about previously on this blog.  Tammet comes in for a deal of criticism in the book: it seems that Foer thought he may not have been as 'autistic' as he claims.  Certainly Tammet is unusual not just in his ability to memorise and retain material, but in his social skills, which are superior to those most autistic people have.  He's worked hard to make them so, however, as he notes in both his books, and as Foer mentions here.

Tammet's abilities in the numerical area are queried: this is the particular area Foer is concerned about, and wonders whether Tammet hasn't just learned and practiced the techniques most memorists use.  He mentions in passing Tammet's ability to learn languages (Icelandic in a week) but doesn't elaborate on how Tammet is supposed to have used 'ordinary' techniques to learn these, which is a pity.  I think Tammet, in spite of Foer's criticisms, has extraordinary brain capabilities (caused by an epileptic fit as a child, it's thought) and is probably much more likely to have an 'opening' in his brain that allows him to achieve what he does.  It's usually the case that savants - or what might be called their opposites, people who have lost their ability to retain new memories (and these appear in the book too) - have had some major brain trauma as a child or adult.  This brain damage reconfigures the brain in some way, so that the normal balance is upset.  Sometimes this results in an extraordinary use of the brain; sometimes it debilitates it to a huge extent.

I must say I thoroughly enjoyed this book - admittedly it's a topic close to my heart.  I did feel a bit let-down, however, to find that in spite of there being a chapter entitled How to memorise a poem Foer didn't come up with anything terribly helpful in terms of learning how to memorise text.  This is something, in fact, that most writers on memory techniques avoid, preferring lists of things or remembering names instead.  But text, such as poetry, and Scripture, is what I find memorisation is most useful for, and the orators of the past learned huge chunks of text as a matter of course. This omission is curious, because at one point he mentions how his mentor, Ed, "had long ago learned the bulk of Paradise Lost by heart (at the rate of two hundred lines per hour, he told me), and had been slowly slogging his way through Shakespeare."  How Ed did this isn't really discussed, except in a brief page or two in this same chapter.

All this talk of mental building (as opposed to metal building) has got me going on memorising stuff again.  I learned a poem yesterday (improving my approach to the memorising by incorporating some of what Foer writes about), and will get back to doing this regularly.  The more you memorise, of course, the better your retention gets, and even in the last two or three years I've found I've improved my retention rate for poems by the slightly different approaches I've been taking to learning them.  I'd love a more foolproof method, but in the meantime will have to go with what I've got.

Years ago, my wife and I worked through a series of cassette tapes on improving your memory by Kevin Trudeau.  He used pretty much the same techniques as Foer writes about here, and Buzan discusses in his 120 books.   We had a great time with these tapes, and certainly achieved what we were supposed to achieve, but lost our skills as soon as we stopped using them daily.  You have to keep at it.  Like any other skill, as soon as you start leaving it alone, the skill level drops.  Foer talks about the OK Plateau in relation to this.  This is when you think you're good enough at a skill and don't push yourself to improve further.  Most of us have skills of some sort at this level.

Good memorisation requires daily practice, and not only daily, but practice that pushes you further and further (it's like playing the piano and challenging yourself to keep on doing stuff that seems beyond you).  For years I've learnt poetry and Scripture while walking to work - or, now that I've retired, while walking the dog.  I've put this aside over the last few weeks because it felt as though my brain was tired with all the work we were doing on Grimhilda!  The result is I have to get up and go again.  Is it worth it?  I think so.  Foer gives plenty of reasons throughout the book as to why it's worth it (and competing in memory championships is the least of them).  One of the best, I've found, is that actually memorising a poem or chunks of Scripture means you get to grips with what they're saying, far more than you ever would if you just read these off the page.  If for no other reason, that's why I'll keep practicing.