The joy of old age. I wrote a post a few days ago comparing Lilburn and Delius, only to discover yesterday that I'd already done this back at the beginning of 2008.
At least the two posts were quite different, and I wasn't just repeating myself in total. It's fine to write about an idea twice; it's when you start saying exactly the same thing about the idea more than once that it's a bit of a worry.
My wife and I are heading off to a little town called Otematata tomorrow for a few days, and then we go on to Cromwell where we'll meet up with my daughter and 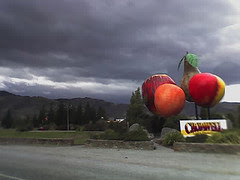 grandson. (And possibly my younger son, who's working up there on a cherry orchard at the moment.) It's our annual holiday, but there's the threat of an interruption to it: I'm on the 'urgent' list to have some work done on my prostate (see much more information about this on workreport.net) and so there's a possibility that we might get called back to Dunedin. Hopefully not. It would be good to have a holiday without the interruption, especially for my wife, as this is the first couple of weeks she's had off in ages.
So blogging probably won't get done while we're away (still less if I wind up in hospital!).

The rather stormy picture of Cromwell's iconic fruit was taken by gak.
Posted by Mike Crowl at 1:14 pm