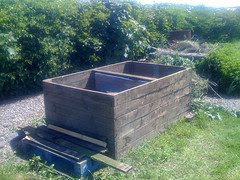 My wife and I have spent a couple of satisfying days in the open air shifting our compost heap from where it’s been for a number of years to the other side of the house. The reason is we want to use the space where the compost has been for more vegetable garden.
We’d decided to build a new kind of compost container; the old one was just an open area with a fence on three sides. It served us well, was easy to access, and produced great compost – albeit it rather slowly. We can’t complain about it, part of the ‘new’ garden we put in late last year was almost nothing but compost, and the veges grew well in it.
After we’d cleared a lot of the good compost out of it last year, we were planning to continue using it, and had started up a fresh section with straight compost, plus a couple of areas where we could dump branches and such, and another where we could ‘cook’ weed material.
However, our plans changed, and hence the new compost round the other side, where there’s heaps of sun and plenty of room to work. Our new compost is one of those (New Zealand) three box affairs (built by us mostly out of wood we already had around the place). One box is for the compost to cook quickly in, the second for it to be shifted to once it’s cooked, and the third for the same process further along the line. We’re not quite using it that way – at present the second box contains a lot of rough material that wouldn’t normally go straight in the compost We’re hoping that will break down in due course and become part of the ongoing composting process.
We’re also trying a new approach to the food scraps. Instead of merely throwing them on the compost as is, as we’ve done for years, we’re putting most of them in the kitchen whiz and breaking them up into much smaller material. The aim is that they’ll break down a lot quicker. (The worms won’t have to work quite so hard!)

The picture shows a compost set-up similar to ours, except that this one has only two boxes instead of three. Photo by mrwalker on Flickr.com
Posted by Mike Crowl at 2:39 pm