Reached the tidy sum of 1200 posts on here yesterday with my piece on webinars. And my fun piece on Grandparents' Rules that I posted on Gomestic yesterday has taken off; for some reason it appeals to other grandparents, who seem to like the idea of a bit of anarchy amongst us older bods.

I was reading on Facebook a few minutes ago about a well-known church leader in Australia who was just opening his car door when someone drove past and blew it off its hinges. I saw this happen in town once, many years ago. A woman opened her door to get out of the car and a passing truck struck it and sent it flying way down the road. You have to be driving close to a car to do that. And hopefully not still holding onto the handle. 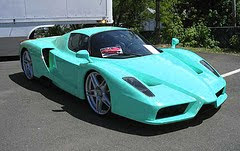 You might not mind such an event if your car was a cheap and nasty little vehicle, full of rust and about to be sent to the tip. But if you had something a bit more classy, a Lamborghini, Maserati and Ferrari, then the thought of replacing the door would be very upsetting. Ferrari parts, I imagine, ain't cheap - nor are those for Lamborghinis or Maseratis - though I guess it would be your insurance company that would be upset more than you.

I suppose most Ferrari, Lamborghini and Maserati owners would have insurance - unless the car had cost them so much they had nothing left over to cover the car.

Photo of the Ferrari by Bob Henry
Posted by Mike Crowl at 7:22 pm