It's my older son's birthday today, and he and his wife, his toddler, my middle daughter and her five-year old, my wife and I all went out for a meal together. And then went onto my son's house where we had some of his birthday cake. I won't be able to lose belly fat at this rate.
My younger son, meanwhile, is on a diet of rice, porridge and a few vegetables this week. It's being done by a number of people in the church to give them the opportunity to empathise with people round the world who are hungry all the time, and also to help them put some money aside to offer some aid to the poor. By what I see on Facebook, some of the others doing the 'fast' aren't enjoying it much!
I'm afraid I haven't taken the fast on myself; I know in advance I wouldn't make it. There was a time when I could fast - for the 48 Hour Famine, for instance - but these days it just doesn't happen, however good my intentions are. It probably needs a change of mind as well as diet, but....
For our meal we went to a place on the corner of Filleul St that was originally built as a pub (by someone we knew reasonably well at the time); it's been a variety of things since, and is 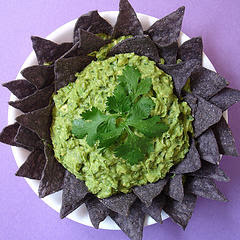 currently a Mexican-style restaurant. The food was good, but oddly, when we got our meals, there was no guacamole on anything, even though it was listed with most things on the menu . (Guacamole, for those - like me - who don't know what it consists of, is made of squashed ripe avocados, tomatoes, onions and some other items.) When my son queried this with the waiter, he was told that they'd received hard avocados instead of soft ones, and so they hadn't been able to make guacamole.
A bit odd not to mention this to the customers, though! And then my daughter's dish arrived without sour cream, which was also listed on the menu. Again we had to chase up the waiter.
Full marks for the food we got; several demerits for being rather casual with information.

The superb photo, Sol del guacamole, is by Hale Popoki
Posted by Mike Crowl at 8:48 pm