Earlier this month I mentioned that I'd been reading Blake

Snyder's book on screenwriting, called Save the Cat. The one I read was a sequel to another book with the same title - they have different subtitles, however.

I've just finished the original book (guess you're thoroughly confused by now) - it's called Save the Cat - the last book on screenwriting you'll ever need. It's written in a style that the average teenager could probably read (if he/she wanted) but that's not to say that its ideas are aimed at someone with the low mental capacity of some teenagers.

The best thing about the book is its focus on structure (the sequel has the same focus but comes at it rather differently). Okay, we may not all be wanting to write a blockbuster, or a top comedy, or a thriller or whatever, but the points Snyder has to make about structure are worth considering whether you're a screenwriter, a playwright or a novelist. You may not feel that everything he has to say is relevant to your craft - you may feel that you're above the kind of advice he gives (obviously people have told him they are by the way he pokes fun at them) - whatever you're reaction to the book it's still worth considering in the light of STRUCTURE.

Did I shout? Sorry, but structure, as I've mentioned on innumerable occasions, is what makes a book, movie, play hold together in a way that's satisfying to the reader, viewer, bum on seat.
I guess you could say the problem with Snyder's approach is that he's thinking only of making movies that are top dollar sellers; lesser movies, indies and so on, don't really get a look in. (He gives Memento a few snide side-comments.) This is fair enough, but obviously not everyone wants to write a blockbuster. However, Snyder's points on structure still stand for most stories: many a decent non-blockbuster movie has fallen over because the structure doesn't follow some of the best principles. Geniuses might get away with a lack of structure (Shakespeare and Dickens, for starters) but most of us aren't geniuses, and we need the backbone that structure gives.

On another topic entirely, my wife and son and I went to the Dunedin City Baptist Church Ball last night (yup, Baptists dance). The Church has held a few of these over the years, and of course there have been 21st birthdays and weddings notable for their dances too. It's good to get together with a bunch of people, many of whom you know, some you don't, and relax by dancing.

I wasn't desperate to go, because I was fearfully tired in the late afternoon after a day of cleaning up and particularly after an hour and a half spent in the garden, where I seemed to run out of energy completely. However, dancing seems to revitalise the body as well as the soul, and I danced most of the dances on the card last night. Pulled out of the line dancing as I just couldn't get to grips with the seeming lack of flow, but otherwise enjoyed what we did. 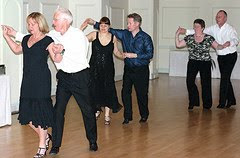 For some reason the music accompanying the Gay Gordons dance was out of sync with the steps - otherwise things were fine.

It's quite delightful seeing the big grins on people's faces - especially people who are often serious in the day to day - and seeing them skipping around the floor like children. I suspect there'll be a good deal of dancing in Heaven!

Photo by Andrew West of people doing the Gay Gordons: opening section. It looks rather more sedate than our version last night, and the room's a lot less crowded.
Posted by Mike Crowl at 6:47 pm