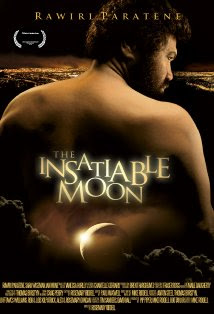 The Insatiable Moon is a film that needs to be seen twice. First time around you're trying to take in the way things work in this particular world, and how the story all fits together. A second viewing gives you more time to reflect.

Arthur (played by Rawiri Paratene) believes he's the 'second son of God.' He lives in a boarding house with a bunch of other people with mental health issues, and is by far the most outgoing and positive of them all. The story explores whether his ability to discern other people's inner turmoils, his belief that God is benevolent to his children, his prophetic words and other insights, are truly charismatic gifts, or merely part of his brain dysfunctions. It challenges us to believe in miracles, in the need for a true belief in God and not just a religious one, and of course, most of all, it challenges us to see people with mental health issues as people loved by God.

The 'villains' of the piece might be a bit too black and white, but they're mostly minor characters: the really interesting people in this movie are those who have a sense of the spiritual and are willing to follow it even if it causes them pain, or requires them to change long-held attitudes.

The scene towards the end, when the suburb of Ponsonby rallies for and against having a boarding house for people with mental health problems in its midst, is the climax, but the more important scene comes earlier, at the funeral of one of the boarding house residents. This is where Arthur comes into his own as a prophetic voice, a man who speaks the words of (first) Son of God.

The other interesting character is the man - Bob - who runs the boarding house: foul-mouthed and short-fused, he nevertheless cares deeply for the men he feeds and cleans up for (seemingly single-handed). This is a vocation for him, rather than a job, although it's unlikely he regards himself as a spiritual man. The 'spiritual' man in the story, the Anglican priest, is at odds with himself and his spiritual life, and seems rather wet by comparison with Bob. It's not that he's meant to represent institutional religion; that would be too simplistic. Rather he's a man in the wrong job, and wisely, by the end of the movie, he's realised it.

Mike Riddell, the author of the original book and the scriptwriter for the movie, doesn't give us all the answers - although he teases us with possible answers at times. His seven years of effort (along with a host of other supporters, including his wife, who directed the movie after the original director had to pull out) in getting this movie off the ground have borne good fruit.
Posted by Mike Crowl at 8:52 am