I just discovered this morning that comments on my Daily Writer blog haven't been getting through to me by email, so possibly a number of commenters have given up on me, thinking I'm too rude to respond.  For some reason this particular blog, even though it's part of the Blogger family, doesn't act the same, and there are certain differences I can't quite get to grips with.  It shouldn't be the fact that it's an older blog (dating from 2005), because the one I'm writing on now is even older (by a few months).   Yet this blog has kept up with the various Blogger changes while the other one seems to be stuck in an earlier age. 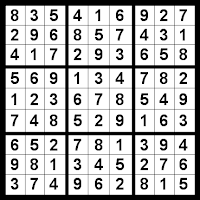 On a less messy note, I wrote to the Otago Daily Times the other day because it has puzzled me for some time that the medium Sudoku puzzles published in their paper were often harder than the hard ones.   They passed the email onto Doug Hendry from The Puzzle Company.  He replied:

The series you [the Otago Daily Times newspaper] run is one where we actually tried to create more difference between the medium and hard puzzles.We can make puzzles on quite a few different settings. The actual level of difficulty in each varies widely, and the biggest range seems to lie within the medium setting. As Mr Crowl pointed out, they can be as challenging – or actually harder – than a puzzle made on the hard setting.One solution we came up with was to make more difference between the levels. We took the Easy and Medium settings down half a notch, and left the hard unchanged.I’d be interested in getting Mr Crowl’s opinion on the attached puzzles.I’ve put three medium and three hard from your current series on a layout, but not identified which is which. If he has the time and the inclination, I’d really appreciate it if he printed the sheet out and tried them, then emailed to say which ones he thinks are medium and which are hard.This isn’t a test of his Sudoku ability, it’s a test of our puzzle making.


Well, firstly it was nice to get such an immediate response to a query, and one that was offering a solution as to why the puzzles varied.  I tired all six of the puzzles and this was my reply to Doug:

1. fairly hard2. hard (didn't finish it in fact, which is sometimes the case with Sudoku in the paper)3. definitely the easiest. 4. fairly hard5 hard6 hard (again I didn't finish this one because I got stuck and couldn't move forward on it - might need more perseverance)


I printed out the puzzles I sent you and gave them a go. Usually I can only solve Easy puzzles, and occasionally rise to the heights of Medium. Hard, never.  [He says he's the company's crossword expert, while his wife is the Sudoku master.]
I managed to solve No1 (which was a Medium), but it took me 25 minutes. I got seven numbers in No2 (Hard), then gave up. I think I could have solved No3 (Medium) but went wrong somewhere after having filled in more than half.
It took me 10 minutes to get four boxes in No4 (Hard), then I gave up.
No5 (Medium) – I got stuck after taking 15 minutes to get half of it filled in.
I didn’t bother trying No6.
So, I was able to solve – with a real effort – one of the mediums, and might have got another. The three hard puzzles were totally beyond me.
You solved all three Mediums and one Hard.
This was only a test on three of each type, but you and I both found the Hard puzzles more difficult than the Medium, and you found the Mediums simpler than I did.
There will be occasions when a Medium puzzle at the upper end of its difficulty scale will be as hard – or maybe even harder – than a Hard puzzle which is at the bottom end of its range of difficulty.

So there you have it.  An interesting exercise, and a gracious response on both occasions.   How to do business, in other words!

The Sudoku in the picture is a finished example from this Dan Rice's site.

Crosswords have been my love from a long time.I have faced this email problem myself when I was a hard core blogger which was like years back.
Check these logic puzzles if your interested -
http://www.iqtestexperts.com/puzzles.php

Thanks, Kate...had a quick look. Worth a bit more time tomorrow...