In my last post I mentioned clearing out some stuff from one of our two attics.   The box of photos has been sitting on the floor waiting an opportunity to be sorted further, and I've just had a go at it.  Heaps of family photos - my children, in particular, but also photos of me with a number of other relatives.   And various other memorabilia.  I've had a bit of a throw-out, because there comes a time when some stuff just doesn't mean anything anymore. 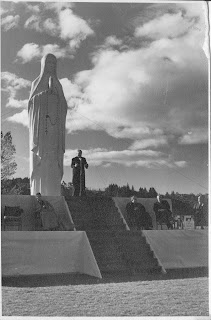 There are a number of photos taken on a camera that was so small you could hide it in your hand.  It produced equally small photographs (9cm by 6.5cm - or 3.5 inches by 2.5).  Amongst these were about a dozen taken at some event in Logan Park (?) in Dunedin that was held - I'm guessing - in the 1950s.  I think I have a dim memory of being at this, but that may be only that I've seen these photos of a number of occasions before.   I've now thrown out a lot of these little photos because they weren't of a quality to make them interesting enough to keep: people's heads (or hats, rather) in the way of what was trying to be photographed, or the distance between the photographer (my mother, no doubt) and the subject being too vast to make what was photographed comprehensible. 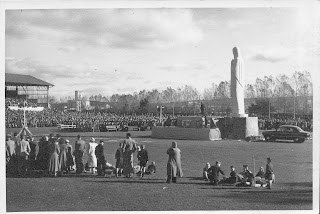 But a couple of the photos had been blown up and I'm reproducing them here.   As you can see, there's a huge statue of Mary - so it was definitely a Catholic occasion.   I thought it had something to do with a visit from the Pope, but according to this site, only Pope John Paul II is the only Pope to have visited New Zealand, so it wasn't a papal visit.   It might have been a Papal Nuncio (Envoy) vis. it, however, but I can't be sure about this.

My other thought that it was a 'Marian Year' - that would make it 1954, I presume   Perhaps someone else can enlighten me?
Posted by Mike Crowl at 12:39 pm