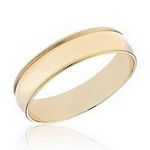 Calling wedding rings (as they're known in New Zealand) wedding bands is something my wife and I might have to bear in mind when we go to the States in January to attend my younger son's wedding.

We'd resigned ourselves to not being able to go, since, when we looked at our finances, we could see that the trip would wipe us out completely, and we'd come back home (if we could afford to come back home) with no resources whatsoever.   Pensioners don't build up their resources quite as quickly (if at all) as people who are earning wages/salaries.

And then, some of the people from our church got together with a plan: instead of giving my son and his fiancee wedding presents (he lives here at present but will be residing in the States after his wedding), they would see if they could raise enough to send us to the wedding - as a kind of 'large' present.  And somehow they have.   (I'm not asking any questions about how it was all sorted; I'm just happy they've managed to do it!)

So we're off to Boise on the first of January, where apparently it's likely to be minus something degrees (!) outside.  I dare say it's warmer inside, but we're going to take plenty of warm clothes anyway.   Can't afford to wind up as a snowman and woman stuck somewhere in Idaho!
Posted by Mike Crowl at 7:34 pm