The worst thing about having an attic (or in our case, two of them) is that they're great places for putting stuff away 'for a rainy day', or 'until he/she has their own place', or 'we'd better keep that, it's got sentimental value' and so on.

We've got two attics because naturally there was one in the original house, and then, when we added on a second floor, a second attic was included - only part of the original one was removed.   Consequently we have a lot of room to store junk.

We've just been up in one of the attics looking for something that of course wasn't stored up there  - where it is stored is another question.   And once you start looking through the boxes you find things you haven't seen for a while, and then you take stuff out to have a proper look at it, find treasures, and away goes the day.

Sometimes you can be brutal and finally dump some things that really don't have a place in your life any more.  I've just got rid of half of a bag full of stuff I'd collected to do collages - I did do a couple several years ago, but that's about when the enthusiasm stopped.   Notice I said 'half a bag' - the rest will go back in the attic, no doubt, because it's not quite at the stage of needing to be thrown out.  It could be useful.   But I did get rid of the bottletops and the fragments of material and a plastic bag so old it was disgustingly discoloured. 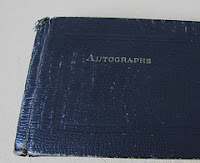 And then there was another box full of photographs: pure family history, with lots of photos of my kids when they were small, many more of my mother and me at various ages from babyhood to late teens (me, I mean, not my mother); photos of the Queen's visit in the early 1950s - she visited the Woollen Mills my mother worked at; photos of the Pope's visit (if it was him he doesn't actually appear in any of the photos!), photos of my aunts, uncles, grandparents, great-grandparents.   Some of these we've obviously got more than one copy of; some are unique.   There's a little Autograph book in which each page has a short quote and a signature from various friends of my mother.   I don't know any of these people, which is a pity, although given the dates it looks as though they were mostly written when she lived in Australia, where I was born.   [The book in the photo is similar, but not the same.]

And there's a game called Funword - it's Scrabble in disguise.  It was used right up until some twenty years ago, and still has some scorecards with my (now deceased) English uncle's name on it, and that of his second wife (they visited at some point), my mother's and some of my kids - who must have been old enough to play at the time.

And finally, in tune with the season, there's a little Nativity scene set inside a box about two hands width wide, with two doors that open outwards.  Inside there's the tiniest Nativity imaginable, and once upon a time there used to be a light in there too.....maybe we should put it in a place of honour beside our Nativity set that's standing in the window.   For old time's sake.
Posted by Mike Crowl at 5:54 pm

What a journey into the past, sounds great. Perhaps on a gloomy day you should take a picnic and thermos with you and really enjoy all that stuff up there. It is after all history, your history. I hope the photos have names, dates, places noted on the back!

I'm currently in residence in my chdhood home as you know and enjoying old memories, photos, seeing old books etc. I'm not a horder and love a good throw out b/c too much stuff gets to me but there have been times I have regretted what I've not kept.

Great fun, Mike but important to do as you're doing; Dad has hundreds of photos lying about that desperately need cataloguing 'cause when he's gone, there's a huge chunk of family history gone if he doesn't pull finger!
Like the photos you banged up on the Hannagan page.... I don't believe my sister was ever that young, though!?,

Yup, she certainly was! And I can remember her being younger...how about that?

Mate, that just means you're a REALLY old bloke.... That photo of Terry is a beauty; do we know who took it? Was it Pat?

I know I'm a really old bloke...except that these days they call people my age 'late middle-aged'.
Yes, the photo of Terry was taken by Pat. She used to visit him very regularly.

See, that's why we all need to catalogue photos; my memories of Terry are hazy at best. I can very vaguely remember visiting the family in Elgin Road when Terry had the shop, and can "sort-of" remember Mary and Paul's combined birthday at Jack and Daphne's house in Laikorai Valley, but that's about it....

I used to visit Terry and Monica a great deal at a certain point, perhaps because they just lived along the road. Terry and I used to play some card game regularly. I also worked for a little while in his shop - I don't think I was his favourite assistant! He had all the prices in his head and could add them up quickly. I didn't and couldn't!

I don't remember much about the Kaikorai Valley house - had more to do with them when they moved up to Maryhill Tce.