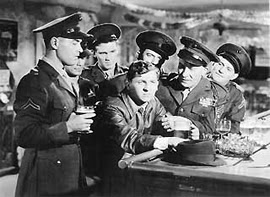 I remember reading one of Preston Sturges’ scripts when I was in my teens. Even though in those days films were much more talky than they are now, I was struck by the long dialogue scenes that pervaded the script.
This was just one of the features of Sturges’ movies. There was never anything much in the way of camera trickery – the camera caught what it needed to and that was that. There was little innovation in cinematic terms. There was often little ‘action’, by which I mean people driving around in cars or on riding horses.
But there was always plenty of dialogue, witty, smart dialogue that was often an inch or two ahead of your ear, and that you only caught up on as the next witticism was arriving. It was always played in an off-hand manner, as though to be witty and articulate was the norm for everyone. And then there were the characters: Sturges never provided a basic few characters. He wrote his screenplays for dozens of sharply edged individuals, from the leads to the tiniest bit-players. No one in his films can be said to be uninteresting; there are so many interesting people that you have a job keeping up with them all, and you almost wonder why some of them are made interesting!
Take the homecoming scene in Hail the Conquering Hero, a film I’ve just caught up with some sixty years after it was made. We have a ‘hero’ who’s far less handsome than his rival; a self-centred mayor whose wife isn’t in the least put down by his rudeness, and his laconic campaign manager; we have someone who’s only role seems to be to organise things – and they invariably get way beyond his capabilities; we have an opera singer wanting to sing in seven flats, a key the band can’t play in; we have at least three adult bandleaders and a confident youthful one (and four bands); we have a little girl who presents the flowers; we have the mayors’ rivals, each one an individual; we have six Marines, from the bombastic sergeant to the mother-loving Bugsy, and the four between. Each person is drawn full of life, even though some only appear in a single scene.
In the opening sequence, four waiters sing behind a woman in a bar; each one of them is a person, one of them forever being just a bit hidden, and another, the smallest one, having to catch up with the others every time they move. And then there’s the maitre d’, who has a short sequence of lines with the sergeant. He’s as funny as anything in the movie, but this is the only time he appears. Three characters who appear in the last part of the movie – the ticket lady, the train conductor and the telegraph man – maybe have a minute of screen time between them, yet they’re just as memorable as the rest of the cast.
It’s partly to do with the actors Sturges cast in his movies, and with his ability to rouse them to life in a fraction of screen time. The actors plainly enjoy their roles and their dialogue; it’s the sort of dialogue most actors would die for these days.
As for the film itself, well, it’s apparently not top of the list in terms of Sturges’ small output (he only directed twelve movies), but there’s plenty to enjoy about the script and story. Yes, it has two or three patriotic moments, but it was made during the war, and real people were out there dying. I don’t think the patriotic moments are badly handled anyway, and Eddie Bracken’s (he of the mishapen face) final speech is both dramatic and patriotic at the same time – and moving.
Perhaps the weakest link – if there is one – is Ella Raines. She acts in the style of the heroine of that time, and that’s okay. But I don’t think she has much more than surface to give anyway. And she doesn’t exactly light up the screen.
Dear Miss Raines apart, this is a great movie, a wonderful palliative to the often vapid movies made these days.
Posted by Mike Crowl at 8:58 pm