Some updates on Gareth Farr (whom I’m listening to at present on my CD player).

1. He’s currently the resident composer of the Auckland Philharmonia, which is kind of being like the Poet Laureate of a country, but on a smaller scale. As a result of being RC for the AP, he wrote a fanfare for their annual al fresco concert, the Mazda Summer Matinee. (Not sure how the Mazda people got in there, but no doubt they have a good reason.) The orchestra’s chief executive, Barbara Glaser, said the fanfare is ‘”so bright and vibrant. Gareth understands just what the spirit of a fanfare is. It has all the excitement and rhythmic touches that we love about him.”
Sounds like Gareth all right. Excitement and rhythm are second nature to him. 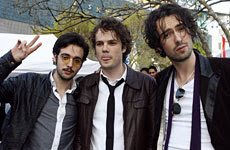 2. As well as writing a fanfare, Farr arranged a couple of songs written by the NZ pop group, Evermore. Evermore performed these with full orchestral backing. Gareth was quoted as saying, “Orchestras are such dramatically wonderful ensembles.” He should know; that’s certainly how he writes for them. The orchestra was also playing some of its more regular repertoire: Mozart, Bach, Beethoven. Wonder how those three would feel being alongside Evermore? And I wonder which of the four will be heard evermore?

3. In a report from gaynz.com, someone wrote about the Te Papa Museum’s 10th birthday: “Other highlights throughout the day include the reprisal [sic] of Gareth Farr's composition Te Papa performed by the New Zealand Symphony Orchestra.”
Now some listeners might think Gareth’s music is a reprisal for their view that he’s too modern, or too loud, or too everything, but I suspect that the writer actually meant ‘reprise,’ which means that the piece is being played again, in this instance in the same place where it was first performed, and by the same orchestra that played on that occasion.
Posted by Mike Crowl at 9:04 pm