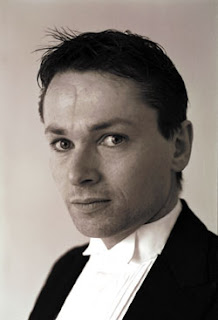 For quite some time I resisted Gareth Farr as a composer. He seemed to be the bright boy of Concert FM - they were always playing his music, which to me was mostly sound and fury. Certainly it is high octane stuff, full of energy, often with lots of percussion hammering away and leaving the strings and woodwind for dust, but it's more than all this.

Some months ago I borrowed the CD, Warriors from Pluto, from the library. It has several pieces by Farr on it: Naga Baba, Te Parenga, Warriors from Pluto, Nga Tai Hurihuri, and, Time and Tide. I had to listen to it while attending to shop work, and didn't always take it all in. But I did find there were enough passages in the CD for me to be more comfortable with Farr's music. It happened that I found a copy for sale on Trade Me not long ago, and I bought it. I've played it often since then - in fact I don't think it's been out of the CD player since I got it.
Not that everything about the music grabs me - I don't go overboard for all of Nga Tai Hurihuri with its mix of Maori kaikaranga and operatic vocals - but I love the mix of violin solo and marimba in Time and Tide, as they swirl back and forward amongst the other instruments. And there is real excitement and virtuoso playing in Naga Baba with its swift-moving woodwind.
There are no samples of any of the pieces I've talked about on Farr's site, but you can hear some of From the Depths Sound the Great Sea Gongs, which will give you a fairly good indication of his orchestral style. And there are other samples too: his string quartet music, which has that same energy that pervades most of his work.
Posted by Mike Crowl at 6:18 pm

I have looked and replied straght away otherwise I will forget and then it will bug me at those sleeping waking moments one gets at a crazy time in the night. Truning is an interesting word especially when Mrs Crackenthorpe was compared with a guinea pig. I am left wondering, and with a picture image, of a guinea pig truning their head. Is it side to side? Up-side-down maybe????
This is the first time I have responded, or even seen, a blog and I won't bore you by asking what it is. The terminology, though I have heard of it on the radio, just doesn't stick.
Will try to keep up as long as it doesn't cause me to trip up, as cryptic puzzles have a tendancy to do.
Happy New Year.
Alyson

Sometimes music is presented in an extraordinary package - not wrapped like a CD or appropriate in a concert hall
Sometimes it draws in many more of the senses and burns itself into memory.
My Gareth Farr experience occurred on a wild windy evening on Paraparaumu Beach.
As part of the Wellington Festival of the arts (or it might have been the Frnge Festival) Farr's percussion group (Strike?) played an outdoor concert at a beachfront park. The double billing also featured a performance group, dressed in outlandishly bizarre costumes,which wandered
around the paths and among the crowd.
Againsta backdrop of ocean, Kapiti Island and evening sky, the percussionists scrambled around a scaffolding playing a variety of instruments ranging from what appeared to be domestic pots and pans to drums and gongs while family groups picnicked on the grass and wrapped their picnic blankets round their shoulders against the nor' wester.
The weird and wild rhythms reverberated in that great outdoor setting like nothing else I have heard.