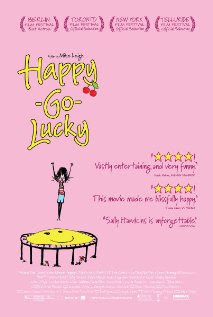 I've watched a couple of movies on TV lately: firstly Five Minutes of Heaven, and secondly, Happy-go-lucky. Let's look at that second movie first. It's directed by Mike Leigh, so naturally it's going to have some off-the-wall feel to it, it's going to be superbly cast, and superbly acted, and it's going to leave you thinking about it for some time after.

But it's also supremely annoying. I've just been looking at some of the reviews of this movie, in which Sally Hawkins plays Poppy, a woman in her thirties who jokes and laughs her way through everything, and who seems to have (to me) an instinct for not understanding how she's affecting other people (particularly those who aren't like her in any way). Hawkins is marvellous in the role, but it doesn't take long for you to feel there's something unlikeable about her. Have I been around gloomy people for too long, and can't stomach someone who's supposedly so full of life and so full of get up and go?

I don't think so. The reviewers all praise the film, and particularly Hawkins; few of them seem to think she would be unbearable to live with. (Her flatmate manages to do so, but she has done for ten years, and they have a longstanding friendship.) Poppy teaches at a primary school and does the job well; she's also fairly sensitive in a scene with a mildly deranged man she meets while out walking alone at night in what would appear to be a rather dangerous area. The rest of the time she rubs many people up the wrong way. Should they be so rubbed? Perhaps. The main one is Scott, played by Eddie Marsan. He's an exceptionally uptight driving instructor, with a most peculiar (but apparently successful) approach to teaching people to drive.

However, I had more sympathy for him than for Poppy. She's plain irritating as soon as she gets in his car, refuses to listen to him, goads him, provokes him and pretends a lack of concentration on the task in hand that drives him absolutely crazy (almost literally, in the end). He's not an especially pleasant character, but to me he doesn't deserve the treatment Poppy dishes out to him.

Nor does the bookshop owner we see briefly at the beginning. He's a morose man who plainly doesn't want to make small talk. Poppy insists on babbling on - it's almost as if she can't stop the endless joking and nonsense, as she demonstrates throughout the movie - and in the end you side with the man in wishing that she'd just leave the shop and leave him alone. Curiously enough, when she goes for a flamenco lesson with the principal of her school, while her eyes keep doing the goofy thing and her body language is still in joking mode, she actually keeps her mouth shut, mostly. The flamenco teacher is as neurotic as the driving instructor, and has a major blow-up in the middle of the lesson. Characters in Mike Leigh movies are never straightforward.

Finally Poppy meets a 'nice' bloke and it all seems to go well. He could still be in the picture after the movie has finished, as it were. But could any guy stand Poppy's nonsense for long? Or would she, having finally found a man who appreciates her, let her tongue have a rest? It's hard to think so.

Five Minutes of Heaven is the story of a Protestant Irishman (Liam Neeson) who, as a teenager, killed a Catholic youth in Belfast - and nearly killed his younger brother in the process. The younger brother is subsequently made to take the blame for the death - his mother insists on saying: You could have stopped it, which is plainly nonsense, but it eats into the boy's soul.

As middle-aged men the two are due to meet again via a TV programme. Neeson's character has done time for the murder, and spends his days warning the world about the perils of ideological thinking in teenage minds. Reconciliation is expected, but the surviving boy, now something of a perpetual nervous wreck (James Nesbitt plays him as though he's going to explode any minute) is just as likely to kill the other man in front of the cameras as forgive him.

The television filming is aborted, and Neeson and Nesbitt eventually find their own way through the mire, with a final violent confrontation. It's a serious, intense piece, with barely a moment of lightness in the intensity, and perhaps it's over the top in its own way (a number of reviewers have felt the ending is too contrived). I found it more satisfying to watch, however, than Poppy's endless gavorting...
Posted by Mike Crowl at 5:47 pm