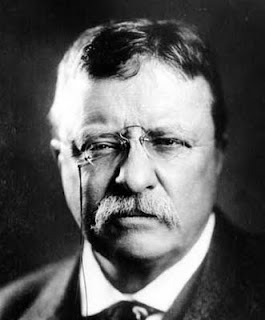 In the Wikipedia entry on Teddy Roosevelt, the following line appears: Roosevelt was also an avid reader, reading tens of thousands of books, at a rate of several a day in multiple languages.

I'd checked up on his biography because in a tweet that came through an hour ago the writer stated: Teddy Roosevelt wrote 150,000 letters in the White House - and read 1-3 books PER DAY as president.

The 150,000 letters while in the White House seems a common statement about Roosevelt, but 1-3 books a day let alone several a day in multiple languages seems to be pushing the bar just a little far...

There's no doubt the man had extraordinary energy, (it sounds in fact as though he was on some kind of hgh) and it's possible that in his time as President, the job wasn't quite so pressured as it is now, but that many books a day? To what extent was he skimming them? And when did he actually find the time to read that much? A person without a job would be doing well to get through that many books a day.

Does it sound as though I'm a little skeptical? I'd really like to have some more detail about this amazing ability to speed read.
Posted by Mike Crowl at 3:03 pm

In THE RISE OF THEODORE ROOSEVELT (an excellent biography), Edmund Morris delivers this anecdote. I got the impressions he generally read a book a day, not three. If you know how to speed-read (I do), it can be done.

But I got the impression much of this was done with books of information, not novels or poems. On those occasions he read more than one book it surely had to involve a great deal of skimming and skipping. ("Photo reading," as opposed to what's normally thought of as "speed reading," is a system based on this principle. I tried that too, and didn't get anything out of it: you can only extract a small fraction of the book's contents that way.)

Unfortunately, people have a tendency to wildly exaggerate and mythologize from a kernel of truth. For instance, the claim is often bandied about that Harold Bloom, the famous literary critic, can read 1000 pages an hour!! He himself has denied this in an interview, saying in effect "you can't even turn the pages that fast." His true reading rate was apparently something like 300 pages an hour (still exceptionally fast). There's no question the man can read with extraordinary speed, but 1000 pages an hour simply is not reading by any normal definition of the word.

Thanks for your comments. A book a day, especially a non-fiction one, sounds more likely, though it's still quite something to achieve, even for a decent speed-reader.
I haven't ever heard of Harold Bloom reading a great speed before, so your info was intriguing. Good to see he denied such a ridiculous achievement as 1000 pages an hour. 300 pages an hour? What does he actually gain by reading that fast? It's the rentention aspect that I query: I think there are some people who can retain even at great speed (my boss seemed to do it, and my father apparently could) but I think it's fairly rare. And if you're reading that fast when do you get time to reflect on what you're reading?