Summer of the Danes 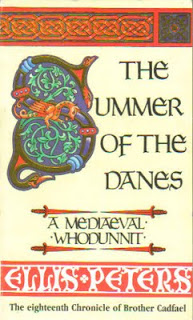 I've just finished Ellis Peters' The Summer of the Danes, the 18th in the Brother Caedfel series. And the most disappointing.

Peters' stylish writing is there, but the story is dragged out and often repetitious, and there's a tiredness about the whole thing that makes for weary reading. I only finished it because I wanted to; there wasn't much to encourage the reader to do so.

The book begins with a chapter that must rank as the only really tedious one in the series - it's full of names and who done what to whom and what bit of the country they're fighting over, and the characters, when they get a chance to actually speak amongst the seemingly endless narration, sound as though they've had the life washed out of them. I had to keep going back to figure out who was who.

There's a murder, of course, (100 pages in) but strangely Caedfel has almost nothing to do with the solving of it. In fact no one actually solves it - the murderer confesses on almost the last page of his own accord. One of the great pleasures of the Caedfel series has been the neat plotting and the element of suspense. Both of these are sadly lacking in this episode.

There's a good deal of huffing and puffing between the Welsh prince whose land has been invaded by the Dublin Danes (Danes in Dublin? - who but Peters would have told us that) and the leader of the Danes. The latter has been brought to the area near Anglesea by the prince's younger brother after he was ousted from his castle for attacking another noble Welshman. The Danes are seen as generous but feisty characters; the Welsh prince is noble and generous and austere even. They personally never come to blows, but talk to each other like a couple of politicians. A little dreary.

There are some underhanded blokes - one of them the murder victim - but they're more annoying than dangerous. And there's a 'girl with spirit' - a fairly typical actor in the Peters' canon; she gets what she wants, of course.

For years we've been unable to find a copy of this book in order to complete the series. Consequently I was looking forward to reading it. Pooh, I'm very disappointed.
Posted by Mike Crowl at 9:08 pm