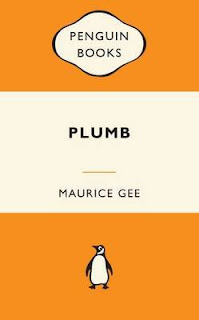 Many New Zealand (serious) novels are so gloomy I no longer bother to read them as they arrive in the bookshops. Mr Pip was a (relatively) recent exception; although it was serious in tone, it somehow managed to have both a positive attitude to life and bring humour to the story. I think the book that finally 'done me in' regarding NZ novels, was The Hard Light, by Stuart Hoar, better known as a playwright. I was supposed to review it, so read it from cover to cover - it was an endurance test.

Anyway, all that by way of introduction to the fact that I've finally got round to reading Plumb, by Maurice Gee, a book which had stayed in the back burner of possible books to read because of what I felt about NZ novels. Plumb turns out to be immensely readable, even though the narrator (Plumb himself) is a character whose opinions are often at odds with the facts (as far as the reader can glean them) and whose short-sightedness in regard to the lives of other people is destructive for some, and a joke to others. Plumb is based on a real person - Gee's grandfather - and you can only hope that the real man was more perceptive and insightful than the fictional character.

Plumb becomes a Presbyterian minister early in the story (early in the chronology - the story runs in two separate time-frames as well as wandering off into other periods in Plumb's history) and is surprised to find that the Church doesn't find his radical views fit well with their institutional approach to Christianity. The problem is that Plumb is always at odds with some group or other: so convinced of his own rightness, he never has time for anyone else's point of view, and makes strong enemies. But his views change from period to period: one year Christian, the next liberal, the next freethinker, the next....well, Plumb goes through pretty much every possible viewpoint that existed in the early 20th century, and still manages to scoff at his long-time neighbours who go through every (what we'd now call New Age) philosophy that arises.

He and his long-suffering wife produce twelve children, yet he spends little time with any of them. One of the saddest moments is after the death by drowning of one of his younger children; he has to admit that he barely knew her. He continually claims to love his wife, but at the end of the story, it seems he loved his own thinking far more. Thinking is what Plumb does; the irony is that he so often thinks wrongly. He sees himself as a kind of prophet, yet if that's truly the case, his prophetic work is not just out of kilter with his society (nothing unusual in that, as regards prophetic voices) but, more importantly, is actually out of kilter with reality. Towards the end of the story he mentions that his last 'book' (little more than a pamphlet) barely sold at all, and some hundreds of copies sit in his basement. The problem seems to be that he is almost entirely intellect, and very little heart. He warms to only a few of his children, rejects one entirely, and is at odds with his grandchildren - except one. Even this child he beats at checkers, so that the child doesn't get above himself.

This all makes him sound like an entirely objectionable character, and in a sense, he is. Yet somehow Gee makes him extraordinarily interesting and readable. Plumb makes a vivid narrator, and we see the world and the people he meets through his eyes in considerable detail. The book is a great achievement, and deserves the praises it's received. There are two sequels, Meg, and Sole Survivor. I'm not sure yet if I'll read them, but time will tell...
Posted by Mike Crowl at 8:00 am

I've just had to add A Hard Light to an annotated bibliography. I am so glad you did the review you did, because I didn't have to read it. You saved me.

Glad to be of help, although I'm a bit surprised you found the review, since the link seems to have been replaced by something totally incorrect. I've put the correct link back again.