Who'd have thought barcodes were interesting?

Have you ever asked yourself when you're watching a retail person using their barcode scanner to put your purchases through where barcodes come from?   Nope, I haven't either, but when you stop to consider it, they have to come from somewhere, and some person somewhere has to make sure that the barcode just scanned will show up as a bag of frozen peas and not a copy of the Bible.

I've known for a long time that ISBNs were all unique, each to its own title - in fact they've proved even more valuable now that we have the internet, where they can be used as a search item.   But I hadn't really thought much about barcodes since the days some evangelicals were going around (either because of Hal Lindsay or his New Zealand counterpart Barry Smith) pronouncing the end of the world because everything was getting a number. 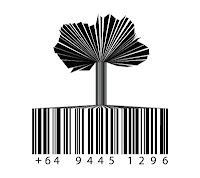 Anyway, while thinking about them just now, I discovered that there's a company in New Zealand that issues barcodes.  Of course there is: New Zealanders are incredibly entrepreneurial, especially when it comes to a niche market.  And believe it or not, there's an element of niche market to barcodes.   Some companies (the big overseas ones) will insist, apparently, that you have to buy dozens of barcodes at huge prices in order to get in on the barcode market.  But if you only want one or two barcodes, what do you do?

Well, you go to Barcodes Ltd, a company that's actually run by a charitable trust, enabling any profits to go to a charity within the country.   This company charges a reasonable figure for one barcode, and reduces the price if you buy ten.  The barcode becomes yours for life - you're not 'renting' it or leasing it in any way.   The barcodes are usable anywhere in the world, not just New Zealand, and this company can even supply you with image version of your barcodes - including adding in special pictorial features - see the picture.  They can even create special images from barcodes you've bought elsewhere.

When I worked in the bookshop, you go to learn the first half dozen numbers of publishers' barcodes, because you were typing them into the computer on a regular basis (lacking as scanner as we did!).  I guess there's some rhyme and reason to barcodes for other products as well.   Maybe I'll have to look into it and report back to you...