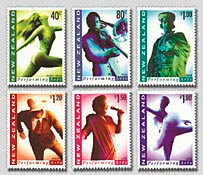 The Dunedin singing stars continue to rise and rise. Now Simon O’Neill, who’s 35, has been contracted to the Met to sing in Die Walkure early next year. I never played for Simon, but knew him from local singing competitions. He was also in the St Kilda Brass Band in the early nineties, a band I’ve had a reasonable amount to do with ever since I was their official accompanist for solos, for a few years.
What have the stamps got to do with this? I'm told that Simon is the opera singer in the series - top right corner.
Meanwhile, Anna Leese goes from strength to strength, this time winning the Maggie Teyte prize. Part of the prize (not sure if this is something to be regarded as a ‘prize’ or an ‘endurance test’) is to sing a recital at the Royal Opera House. Hmm, that’s some place to sing in.
Years ago I had a friend called Donald Rutherford, with whom I toured round New Zealand doing La Boheme for the NZ Opera Company, when they were presenting what they called piano tours. I was the ‘piano’ part. Donald left NZ after that to go and join a Canadian opera company, and we lost touch. And then in the late sixties, when I was in England, he turned up out of the blue. He’d been engaged to understudy the part of Hamlet in an opera written by Humphrey Searle. This was an opera composed in the 12 note serial format, a method, which in my view, is counterproductive to good composition, but that’s another story. What it meant was that the thing was bloody hard to sing. Donald got the job as understudy because he’d been in the original production in Canada, as I recall, and knew the part well. Unfortunately, he had to go on, as the person who was supposed to do the part, was ‘indisposed’ as they say. I saw his performance, and it would have been good in a much smaller house, but the Royal Opera House is massive, and only voices that are naturally huge will fill it. It seemed as if the place was swallowing Don’s voice up every time he opened his mouth. Hamlet, I think, has gone the way of all unsuccessful pieces. And probably a good thing too!
Alongside Anna Leese and Simon O’Neill, Ana James, Jonathan Lemalu and Teddy Tahu Rhodes all continue the upward rise in the opera world. Rhodes is not someone I’ve ever met – if I recall he was involved with the Christchurch Opera Company at one time. Think he may have been in the full-scale production of La Boheme that they brought to Dunedin about eight years ago. My younger son appeared in it, as part of the local chorus brought in for the occasion. He had a brief moment of visibility as the waiter who cleans up after Musetta has tossed her glass to the floor and shattered it. Such is fame.
Posted by Mike Crowl at 7:06 pm