How not to throw the discus

Four days without rain or overcast skies or freezing winds. Real live sunshine. We’re beginning to feel human again.
While we were watching the movie, Serenity, last night at a friend’s place, our host was recording some of the Olympic Games on his HDD. (It’s something we can do too on our machine, although we haven’t actually done it yet.) Anyway, amongst the various things that we picked up on after the movie was finished, were some of the Decathlon events: the hurdles and the discus throwing. 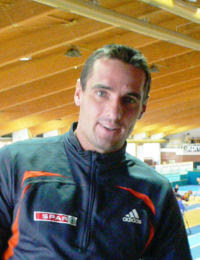 A couple of odd things stood out. In one of the hurdles heats, one of the contestants leapt up with all the others to race, and then stopped, and did nothing more, while the other hurdlers ran on. No explanation from the commentators – he was just ignored, as though he’d never been in the race to begin with.
And then, as we were watching the discus, we pondered on how easy it would be for someone throwing the thing to miss the opening and send it crashing into the nets. And immediately one did! A gentleman by the name of Roman Šebrle, who was the top man in the Decathlon discus. How frustrating for such a thing to slip from an athlete’s fingers. Our host reckoned it was because Roman had spat on the discus before he threw it!
I didn’t know Šebrle as a name, so I kept hearing it as Roman Chevrolet, which seemed to be how the announcers were saying it. Crikey, what a romantic sounding name – it’s the sort of name you give to a hero in a romantic novel!
We also watched a bit of the Russian/American volleyball game. I think if you added up the amount of time they spend playing and the amount of time they spend hugging each other, the latter would come out on top easily. The game is played in a pretty boring fashion, really, with massive serves that almost invariably cause nothing else to happen in that volley. When they do actually all get to chase the ball around, it's over in seconds.
I watched the table tennis the other night: at least in that game they get on with it, and while some of the rallies may be very short, a good number have some action in them. I don't know who the two guys were, but one was a tall Scandinavian and the other a Chinese from China or Hong Kong. The Scandinavian wiped the floor with the Chinese, which apparently wasn't supposed to happen.
And one other thing we caught up on: the women's Taekwondo. There was a New Zealand girl in this, and she and her opponent spent so much time hopping back and forth from foot to foot and never actually doing more than sizing up the opposition that the referee had to keep stepping in and reminding them they were supposed to be fighting - and giving them penalties for not doing so. Not one of the highlights.
Posted by Mike Crowl at 8:06 am