In my pessimistic mode, I have to wonder how long Michael Phelps, the Olympic gold-medallist (over and over) can go on before he falls apart? In yesterday’s Otago Daily Times, they listed how much food he consumes in a day in order to keep himself thriving. His meals would feed several families in the Third World for a week. You have to wonder at the rationale of that: one human being consuming so much food in order to do what? Swim faster than everyone else. How long will the fame last? What’s the point of being a millionaire swimmer if, in a few years time, you’re going to look like an overweight blob? Because consuming food on that level must have an effect eventually, even if it isn’t now. 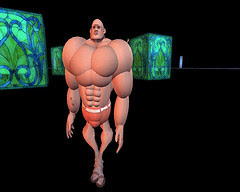 And the way he and these other Olympic swimmers look: they’re all shoulders. Top heavy, somehow. Every time I see them I’m reminding of this picture by Bettina Tizzy which I first posted on my other blog.
Anyway, according to the report, Phelps consumes 12,000 calories a day (the average male needs only 2,000 and would survive on less).
Here’s breakfast: three fried-egg sandwiches loaded with cheese, lettuce, tomatoes, fried onions and mayonnaise, two cups of coffee, a five-egg omelette, a bowl of grits, three slices of French toast topped with powdered sugar and three chocolate-chip pancakes.
Urrgh.
Lunch is: a pound of enriched pasta and two large ham and cheese sandwiches slathered with mayonnaise on white bread – and about 1,000 calories worth of energy drinks.
Evening meal: a pound of pasta and an entire pizza, washed down with another 1,000 calories worth of energy drinks.
It’s enough to make you sick, personally, and that seems to be pretty much how the Guardian writer Jon Henley felt as well.
Notice the lack of vegetables (apart from breakfast tomatoes and lettuce) and fruit. This poor kid is going to have a very unhealthy system before much longer.
Posted by Mike Crowl at 5:17 pm