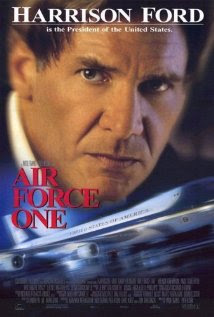 We watched Air Force One again last night; I’d forgotten how jingoistic it is.

Near the beginning Harrison Ford (playing the President of the USA) gives a speech (in Russia) saying how he won’t stand for little terrorists taking over as presidents of little countries and the US will step in and stop them! And it goes on in like fashion throughout.

We’ve already seen the US SAS-equivalent flying in and capturing one of these little terrorists while shooting everyone else in sight (of course these people don't count; they're just unnamed guards 1 through to 20, and no one cares that they might be real human beings). One never gets to sympathise in any way with the baddies: Gary Oldman is the main baddie and he has some very nasty scenes, which only make us hate him more and more.

Of course it’s very excitingly done, and is full of tension (Wolfgang Petersen at his best). Harrison Ford does his usual steely-eyed stuff at the crucial moments (see picture), and it’s a wonder the baddies don’t turn into butter and melt away. And not only is he the President he’s also a Father and a Husband. Oldman tries to get in a word edgeways about being a 'father' too (with three little kiddies), but you know he doesn’t have a capital F on his version of 'father.'

A couple of quotes from reviews about this movie:

The two hours of this movie felt like such an eternity that I was certain my clothes were going to be out of style by the time it was over. [Charles Taylor in Salon.com]

The movie also resurrects that ancient and dependable standby, the Choosing of the Wires. In countless other movies, the bomb squad hesitates between ``Red . . . or black? Red . . . or black''). This is a big-budget movie and presents us with five wires. It's an emergency, and the president needs to decide which two he should connect. See if you can guess the right two colors. The choices are green, yellow, red, white and blue. [Roger Ebert]
Posted by Mike Crowl at 1:45 pm